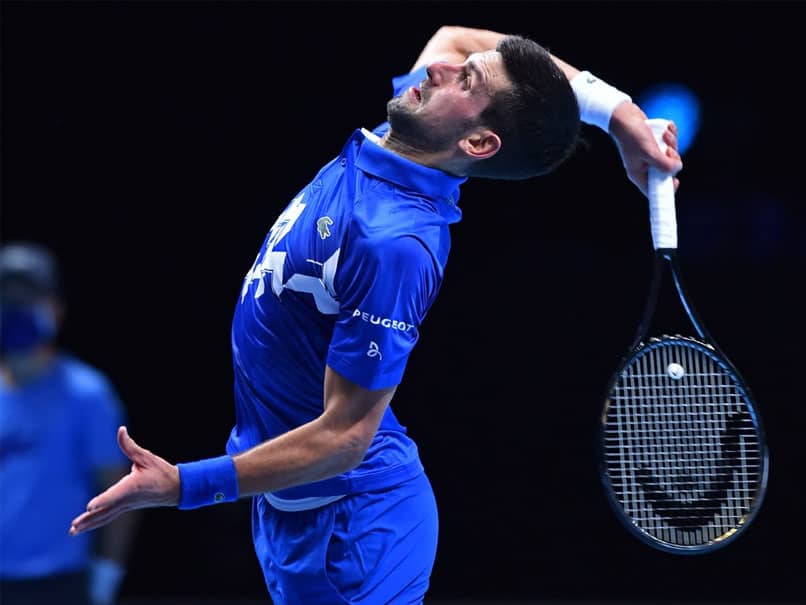 Novak Djokovic is chasing a record-equalling sixth title at the ATP Finals in London.© AFP

Novak Djokovic produced a masterclass against Argentina's Diego Schwartzman on Monday as he embarked on his campaign for a record-equalling sixth title at the ATP Finals in London. The world number one wobbled at the start of the match against the diminutive eighth seed, making his debut at the elite eight-man event but recovered to win 6-3, 6-2. Djokovic, who has already sealed the year-end number one spot for a record-equalling sixth time, is aiming to match the absent Roger Federer, who holds the record of six ATP Finals wins.

The Serbian, 33, has enjoyed another sparkling season despite the coronavirus interruption, winning four titles including the Australian Open.

He came into the match at an empty O2 Arena with a 5-0 record against Schwartzman but the Argentine debutant started impressively, breaking Djokovic in the third game.

The 28-year-old double-faulted in the following game to hand Djokovic two break points and the Serbian seized his chance to restore parity.

Djokovic upped his level of consistency and ground down his opponent, who stands just 5 feet 7 inches (170 centimetres) tall, breaking again in the eighth game and converting his first set point with a powerful serve down the T.

He secured another break in the first game of the second set to take an iron grip on the match.

Djokovic repeated the feat in the fifth game when Schwartzman went wide with a forehand and although the Argentine added a bit of respectability to the scoreline with a hold, it merely delayed the inevitable.

"The beginning of the match wasn't that great for me," said the top seed. "He broke my serve in the third game but I managed to re-break. It was a close encounter until I broke his serve at 4-3. I managed to close out the first set.

The five-time champion said he was missing the fans, who usually pack the O2 Arena.

"I've been playing the ATP Finals in this arena for many years and I've been blessed to experience some incredible matches and atmospheres and it feels very strange to play in front of empty stands," he added.

In the evening match in Group Tokyo 1970, Daniil Medvedev takes on 2018 champion Alexander Zverev in a rematch of last week's Paris Masters final, when Medvedev came out on top.

The O2 Arena is hosting the ATP Finals for the 12th and final season before the year-end championships moves to Turin next year.

Novak Djokovic Diego Schwartzman Tennis
Get the latest updates on India vs Australia Series, check out the India vs Australia Schedule for 2020-21 and Ind vs Aus live score . Like us on Facebook or follow us on Twitter for more sports updates. You can also download the NDTV Cricket app for Android or iOS.