The top eight available players in the men's rankings -- with Roger Federer absent -- will compete at the end-of-season tournament, which starts on Sunday behind closed doors. 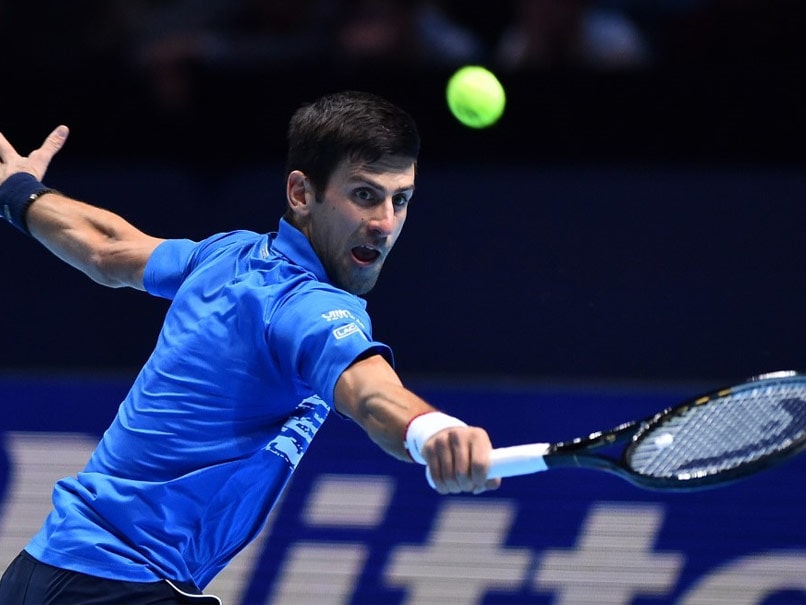 Novak Djokovic is bidding to win the ATP Finals for a record-equalling sixth time.© AFP

Novak Djokovic is bidding to win the ATP Finals for a record-equalling sixth time as Rafael Nadal chases the biggest title missing from his glittering resume at London's O2 Arena. The top eight available players in the men's rankings -- with Roger Federer absent -- will compete at the end-of-season tournament, which starts on Sunday behind closed doors despite a coronavirus lockdown in England. The two round-robin groups have been named Tokyo 1970 and London 2020 on the 50th anniversary of the first staging of the event.

Second-seed Nadal will compete against defending champion Stefanos Tsitsipas, Dominic Thiem, and Andrey Rublev, who is appearing for the first time, in Group London.

The four best-placed players from the round-robin stage will progress to the semi-finals of the event, taking place in London for the final year before a move to Turin.

Six-time champion Federer, recovering from knee surgery, is the most notable absentee after a global tennis season truncated by the Covid-19 pandemic.

Five-time champion Djokovic, who recently equalled Pete Sampras's record of six year-end number one finishes, has lost just three matches this season, with one of those his default at the US Open.

The Serbian, who has not won the London event since 2015, said he was looking to end his season on a high at the elite eight-man event.

"Coming into the tournament and knowing that I have clinched the year-end number one releases some of the pressure, definitely," he said.

"But at the same time it doesn't change what I hope to achieve in this tournament and why I'm here.

"I really want to win every single match that I get to play and try to get my hands on the trophy and I want this trophy as much as anybody."

Nadal, who pulverised Djokovic in the French Open final last month to pull level with Federer on 20 Grand Slams, has qualified for the ATP Finals for a record 16 consecutive years

The Spanish world number two is well aware of his shortcomings on indoor hard courts -- only one of his 86 trophies has come on the surface.

"I think I am able to play a little bit better the last couple of years indoors than what I did at the beginning of my career without a doubt but that's the numbers and I can't say something different," said the 34-year-old two-time finalist.

"I hope to change that this week."

Despite his lack of indoor success, the shortened season could count in Nadal's favour -- he has been forced to withdraw from the ATP Finals six times previously.

Last year's winner Tsitsipas, who beat Thiem in the final, comes into the tournament after early exits in Vienna and Paris.

"Very happy to be back, that's for sure," said the Greek world number six. "Every year I get to experience being back here is thrilling.

"It's like a meeting spot for those that had a good year to be back here, celebrate their hard work, their dedication to the sport. I'm very privileged to be part of it."

Austria's Thiem broke his Grand Slam duck at the US Open in September, beating Zverev in the final, and the world number three said he now felt as comfortable on hard courts as he does on clay.

Zverev, who has won two titles this season, has been dogged in recent weeks by domestic assault allegations made by a former girlfriend but he insists they are untrue.

"While I very much regret that those accusations are made, I have to stick to my initial thing of them being just untrue and continue to deny them," said the German.

Medvedev, who lost all three matches on his debut in London last year, comes into the tournament as one of the form horses after winning last week's Paris Masters.

Rublev, who has had a breakthrough season, winning five titles, and world number nine Schwartzman complete the field.

Novak Djokovic Rafael Nadal Roger Federer Tennis
Get the latest updates on IPL Auction 2023 and check out  IPL 2023 and Live Cricket Score. Like us on Facebook or follow us on Twitter for more sports updates. You can also download the NDTV Cricket app for Android or iOS.