Third seed Daniil Medvedev claimed his first Paris Masters title at Bercy Arena on Sunday by battling back from a set down to beat Germany's Alexander Zverev. 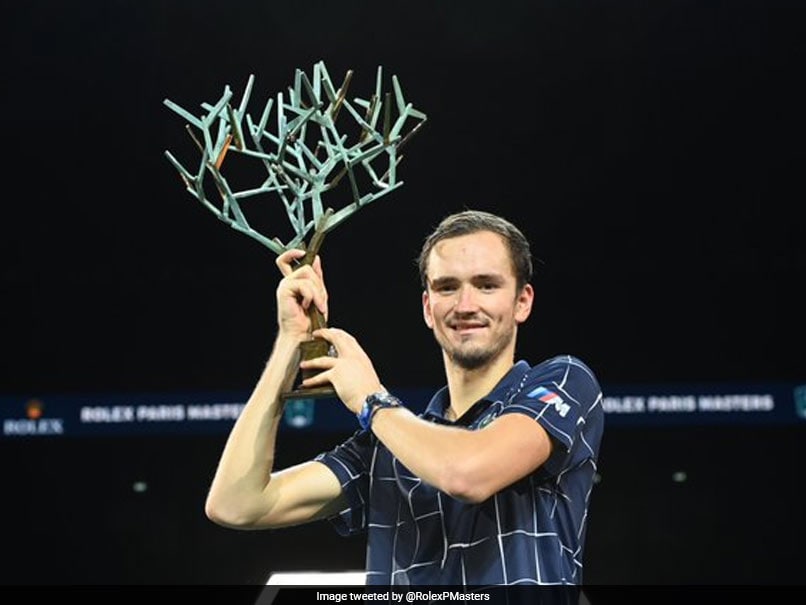 Daniil Medvedev has had an up-and-down season, but was at his best this week in Paris.© Twitter

Third seed Daniil Medvedev claimed his first Paris Masters title at Bercy Arena on Sunday by battling back from a set down to beat Germany's Alexander Zverev. The Russian was on top form in a high-quality encounter, winning 5-7, 6-4, 6-1 to secure his first trophy of the season and the eighth of his career. "It's great, I'm really happy. As I always say, I don't always show this after matches, but I'm always happy to win," said Medvedev after securing his third Masters title.

Both players will now turn their attention to the ATP Tour Finals in London, an event won by Zverev in 2018.

Medvedev has had an up-and-down season, but was at his best this week in Paris, continuing his magnificent record on hard courts -- all of his ATP titles have come on the surface.

"Before this tournament I wasn't in great form, zero finals this year and I was crying, well complaining, to my wife, 'Oh my God, I don't have the level, not playing well, not even any finals'," he said.

"But now, three Masters titles, it's great. I have had the level this week. I managed to keep the pressure on and in the end I broke his level a little bit."

Fourth seed Zverev, who was bidding for a third straight tournament victory after back-to-back successes on home soil in Cologne, remains without a Masters title since the 2018 Madrid Open after seeing his 12-match winning streak ended.

He has recently denied allegations from his ex-girlfriend Olga Sharypova that he tried to "strangle" her while at last year's US Open.

Zverev hit out at those criticising him after the match.

"I know that right now there are a lot of people who will be trying to wipe a smile off my face, but I'm still smiling under this mask," said Zverev.

The 24-year-old Medvedev has won two of his last three matches against Zverev, having also beaten him in last year's Shanghai Masters final, but still trails their head-to-head 5-2.

The world number five outlasted the US Open runner-up in a near-empty Bercy Arena -- with France in its second coronavirus lockdown -- securing the win after two hours and eight minutes on court.

Zverev, who knocked out Rafael Nadal in the semi-finals, was left to rue a losing run of seven straight games from the end of the second set and into the decider.

Both players continued their excellent serving form for much of the opening set, but the German waited for his moment to pounce, bringing up three set points in game 11 with a fine backhand passing shot.

It looked as though he had sealed the set at the second opportunity when a Medvedev backhand was shown by Hawkeye to have flown long, but there was no challenge from Zverev.

It mattered little, as the world number seven secured a one-set lead when his opponent fired off target on the next point, celebrating with a fist pump matched by coach David Ferrer sitting in his player's box.

Medvedev put Zverev under serious pressure in a marathon third game of the second set, but after eight deuces and four break points, the 23-year-old managed to hold on thanks to strong play at the net.

But Medvedev kept pushing and finally broke through to lead 5-4 as Zverev sent a forehand long.

He confidently served it out to force a decider for only the second time in the pair's seven meetings.

Medvedev had seized the momentum and he broke to love in the opening game of the third set, before staving off four break points to take a 2-0 advantage.

His return game was in full flow and he all but ended Zverev's challenge by sealing a sixth straight game to move a double break in front.

Zverev was visibly deflated by his opponent's surge and he double-faulted on Medvedev's second match point.

Comments
Topics mentioned in this article
Rafael Nadal Daniil Medvedev Alexander Zverev Tennis
Get the latest updates on IPL 2021, check out the IPL 2021 Schedule and Indian Premier League Live Score . Like us on Facebook or follow us on Twitter for more sports updates. You can also download the NDTV Cricket app for Android or iOS.