Roger Federer and Novak Djokovic, along with six fellow tennis stars travelled to Westminster by the London Underground. 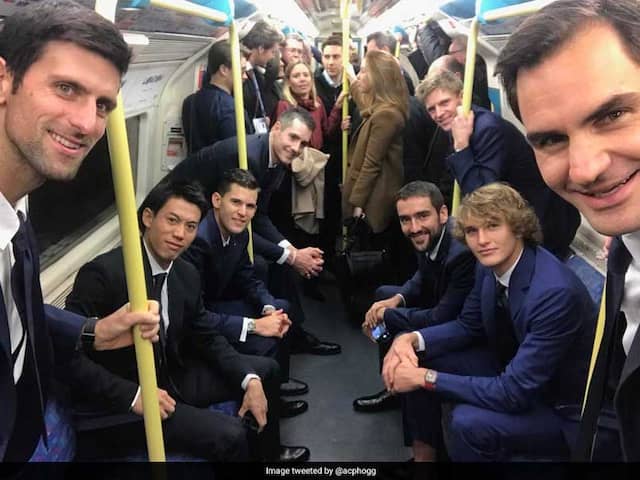 The players seemed to be in high spirits and even mixed with commuters on the busy Jubilee Line route.© Twitter

Roger Federer and Novak Djokovic are among the most well-known sports stars in the world and a public sighting of them is a rarity. However, some commuters on the London Tube got the surprise of their lives when the two multiple-time Grand Slam winners, along with six fellow tennis stars were spotted taking the public transport. Federer, Djokovic, Alexander Zverev, Kevin Anderson, Marin Cilic, Dominic Thiem, Kei Nishikori and John Isner travelled to Westminster by the London Underground from North Greenwich stop at The O2 for the 2018 ATP Finals launch at London's houses of parliament.

The official Twitter handle of ATP World Tour posted videos and pictures of the tennis stars on their journey, which quickly went viral on the social media platform.

It wasn't just our #NittoATPFinals doubles players that hopped on to the London Underground this evening! #Selfie #Londonisopen pic.twitter.com/9ewxS76rAk

"Although we've probably all ridden on the tube a time or two, this was very different. It's a very cool way to make an entrance. There were quite a few surprised looks on the faces of folks, especially when Roger and Novak walked by. It was a pretty cool treat for them," John Isner was quoted as saying by the ATP World Tour website.

"Over 250,000 fans will be travelling to The O2 to watch the action in the coming days – the vast majority by public transport – so it's great that the players had the chance to experience the journey for themselves. I'm sure their fellow commuters won't forget the night they boarded the same Tube carriage as some of the finest tennis players the game has ever seen," said Chris Kermode, ATP Executive Chairman and President.

Federer is aiming to complete a century of titles at the ATP Finals but will likely have to find a way past the irrepressible Djokovic, who is looking to round off his astonishing season in style.

The two men, with 34 Grand Slams between them, are the twin titans at the season-ending event at London's O2 arena.

The title is contested by the eight players who have accumulated the most ranking points over the season and is in a round-robin format, with the best four players reaching the knockout semi-finals stage.