India Vs South Africa: Rohit Sharma Poses With Fans Ahead of 1st ODI In Durban

Rohit Sharma will be a key member of the ODI squad after his indifferent show in the Test series. 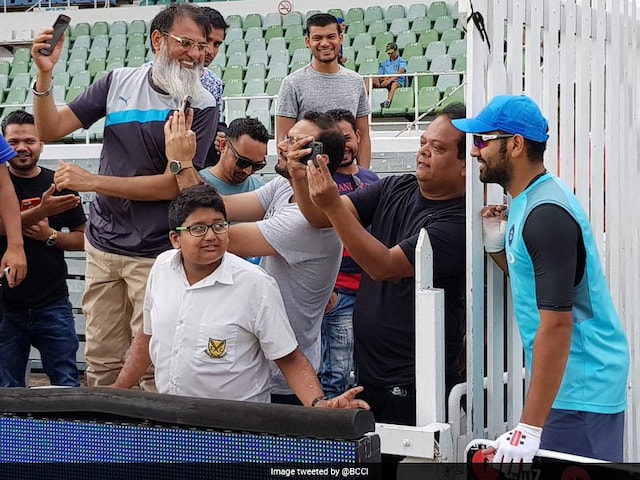 Rohit Sharma had a great time with the fans ahead of the first ODI in Durban.© Twitter

India opener Rohit Sharma seems to be having a great time with the fans off the field as India gear up to play the first of the six-match ODI series in Durban. Rohit, who is confident of putting up a great show in the one-dayers for his side, was seen posing for some photos with the fans after a net session that gave the crowd, which had assembled to see India's practice session ahead of the series opener, a lot to cheer about. BCCI took to Twitter and uploaded a couple of images and captioned it as, "Sparing some time post practice - ODI vice-captain @ImRo45 #TeamIndia #SAvIND."

India will not tinker with their opening combination in the first match and Rohit along and Shikhar Dhawan look set to open the proceedings for the visiting side. Having lost the Test series 1-2, India would look to get off to a winning start in the one-day series and with AB de Villiers out with a finger injury in the first three matches, the visitors would look to take full advantage of his absence.

India have a long limited-overs' schedule until their next big Test assignment this year.

At the same time, the Men in Blue will be intent on winning their first-ever bilateral ODI series on the South African soil.

Comments
Topics mentioned in this article
South Africa Cricket Team India Cricket Team Rohit Sharma Kingsmead, Durban South Africa vs India 2018 Cricket
Get the latest updates on IPL 2020, check out the IPL Schedule for 2020 and Indian Premier League (IPL) Cricket live score . Like us on Facebook or follow us on Twitter for more sports updates. You can also download the NDTV Cricket app for Android or iOS.