Virat Kohli missed the 3rd T20I due to a stiff back but that didn't stop him from giving a helping hand whenever the team needed him. 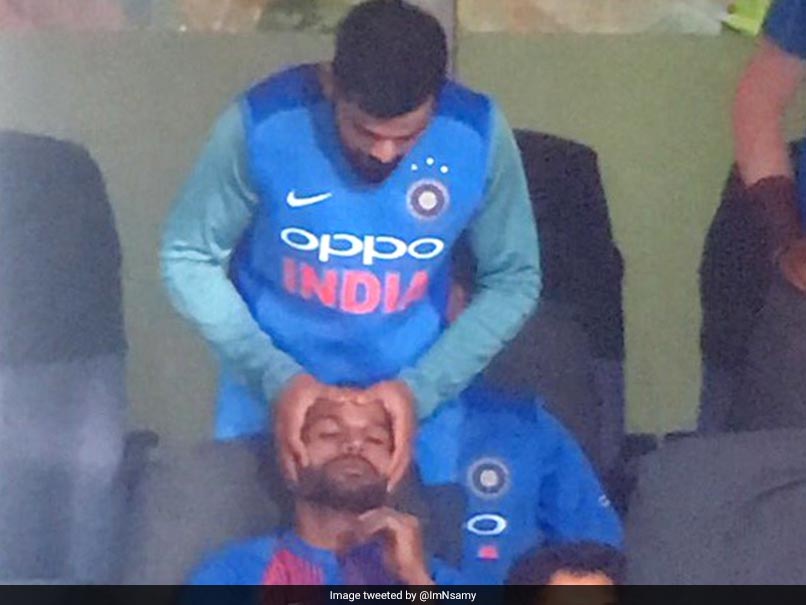 Virat Kohli had a sensational tour of South Africa both as a captain and as a batsman but the Indian skipper missed the third and final Twenty20 International that India won to clinch the three-match series 2-1. Kohli was sidelined due to a stiff back with Rohit Sharma taking charge of the team in his absence but that didn't stop him from pitching in whenever the team needed him. The Indian skipper was spotted giving a head massage to teammate and India opener Shikhar Dhawan during the final T20I at Newlands in Cape Town.

Dhawan and Kohli seem to have a great chemistry on and off the pitch. Besides posting pictures with their families and selfies with each other, the duo have also shared some crucial partnerships on-field, especially in the recently-concluded South Africa tour.

Kohli and Dhawan had stitched together a 158-run partnership for the second wicket during the fourth ODI in Johannesburg and in the process equalled a record set by Rahul Dravid and Sourav Ganguly. This was the eighth instance when Dhawan and Kohli were involved in a 100-run stand for the second wicket.

Before Dhawan and Kohli, the record was held by former India batting legends Dravid and Ganguly, who have eight 100-run stands for the second wicket to their name.

Both Dhawan and Kohli performed brilliantly in South Africa. While the latter was the top run-getter in the Tests and ODIs, the former outscored everyone in the T20Is.

Kohli scored 286 runs in the Test series to finish ahead of AB de Villiers, who had 211 runs. Kohli was head and shoulders above everyone in the ODIs with India dominating the series 5-1.

Besides sitting out the final T20I, Kohli failed to get going in the previous two T20Is but Dhawan made up for Kohli's lack of runs by topping the charts with 143 runs at an average of 47.67 and a strike rate of 153.76.

Comments
Topics mentioned in this article
India Cricket Team South Africa Cricket Team Virat Kohli Shikhar Dhawan South Africa vs India 2018 Cricket
Get the latest updates on IPL Auction 2023 and check out  IPL 2023 and Live Cricket Score. Like us on Facebook or follow us on Twitter for more sports updates. You can also download the NDTV Cricket app for Android or iOS.