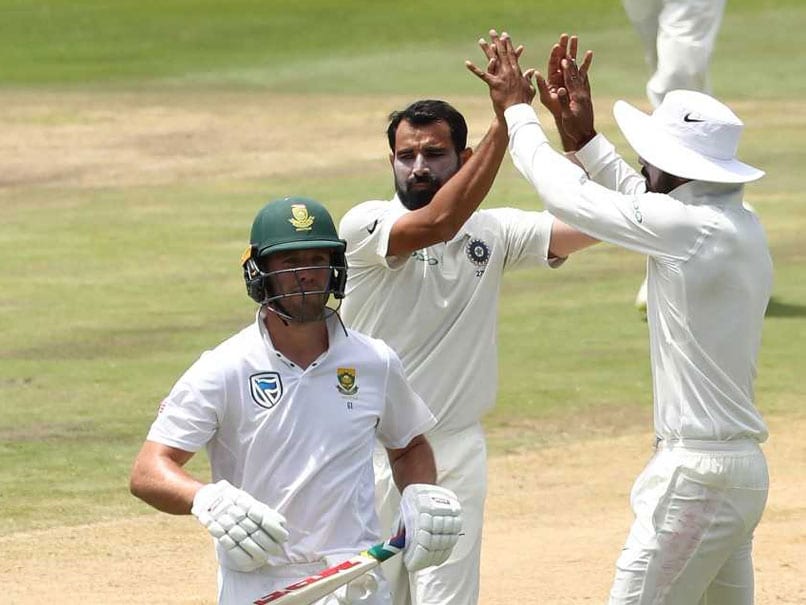 India celebrate after winning the third and final Test match at Johannesburg.© BCCI

India made a massive statement ahead of the limited overs series againstSouth Africa by beating the hosts by 63 runs in the third Test at the New Wanderers Stadium in Johannesburg on Saturday. Playing for pride in the final Test after going 0-2 down in the three-match series, the visitors were once again staring at defeat with Hashim Amla (52) and Dean Elgar (86*) going great guns in the first session on Day 4. Chasing 241 for victory, South Africa were 124 for one after Amla and Elgar defied the Indian bowlers on the penultimate day. However, it all went sour for the hosts quickly after Amla's fall as India made a stunning comeback to bowl out the hosts for 177 in their second innings.

Elgar, who took a nasty blow on his helmet on Friday and forced early stumps, was top scorer for his side with a fighting unbeaten 86-run knock.

In a dramatic turnaround, South African lost their last eight wickets for 53 runs as India remained unbeaten at Wanderers.

Mohammed Shami was the chief destroyer as he ended the second innings with figures of 5/28. He was aided brilliantly by Jasprit Bumrah (2/57), Ishant Sharma (2/31) and Bhuvneshwar Kumar (1/29) as India's decision to go with an all-out pace attack bore fruit.

The win ensured India stayed comfortably on top of the International Cricket Council Test rankings despite losing the series 2-1.

South Africa would have drawn level on points if they had completed a clean sweep.

The hosts were looking comfortable as Elgar and Amla compiled a partnership of 119, although it took four hours and 50.4 overs of hard work on a difficult pitch. It was only the third century partnership of the series.

But India hit back with the wickets of Amla and AB de Villiers in quick succession shortly before tea.

Amla fell with the total on 124 when he clipped Sharma firmly towards midwicket and Hardik Pandya dived to his right to hold a good catch. Amla had faced 140 balls in making his second half-century of the match.

De Villiers started confidently with a boundary off Sharma but was out for six when he was squared up by a lifting delivery from Jasprit Bumrah which flew off the shoulder of his bat to Ajinkya Rahane at gully.

The same two bowlers struck again immediately after tea. South African captain Faf du Plessis was bowled by a ball from Sharma which cut back and kept low and the out-of-form Quinton de Kock was trapped leg before wicket first ball by Bumrah.

Vernon Philander batted brightly to make 10 before he pulled a ball from Shami onto his stumps, to be followed in quick succession by Phehlukwayo, Kagiso Rabada and Morne Morkel, all without scoring.

Elgar, having batted with unflappable concentration for more than five hours, tried to play some shots and keep the strike after being joined by last man Lungi Ngidi. He hit a six off Kumar before Ngidi was caught behind off Shami.

Conditions remained difficult for batting but there were none of the extreme bounces and deviations that prompted the umpires to halt play shortly before the scheduled close on Friday.

But once the Elgar-Amla partnership was broken new batsmen were unable to play with any confidence.

With the Test series comes to an end, both teams are scheduled to play six One-Day Internationals and 3 T20Is.

The first ODI will be played on February 1 at Kingsmead in Durban.

Comments
Topics mentioned in this article
India Cricket Team South Africa Cricket Team Virat Kohli Faf du Plessis South Africa vs India 2018 Cricket
Get the latest updates on ICC T20 Worldcup 2022, check out the Schedule and Live Score. Like us on Facebook or follow us on Twitter for more sports updates. You can also download the NDTV Cricket app for Android or iOS.