Emotions ran high as India made a dramatic comeback to clinch the third T20I and the series after beating New Zealand in the Super Over. 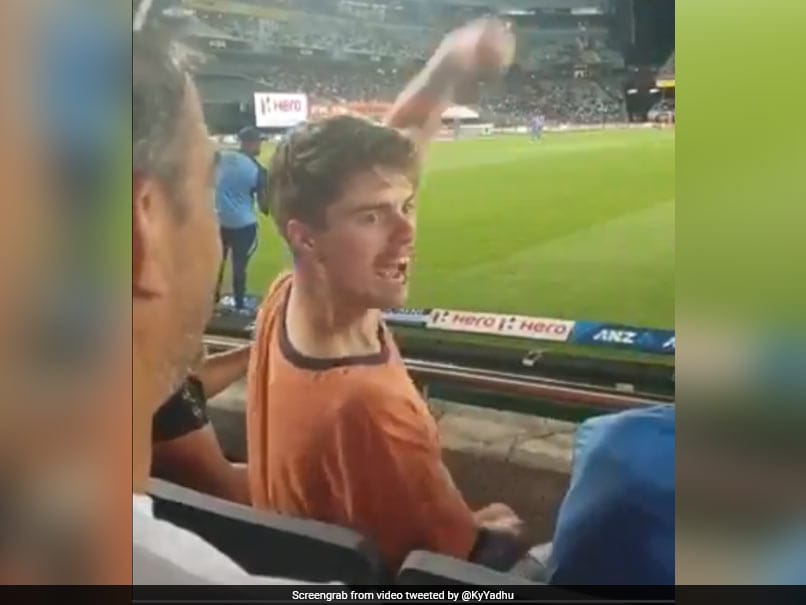 Emotions ran high as India made a dramatic comeback to clinch the third Twenty20 International(T20I) against New Zealand in the Super Over at Seddon Park, Hamilton on Wednesday. When pushed against the wall, the Indian players showed great fighting spirit and kept themselves alive in the game and they got full support from their 12th man -- the Indian fans -- who had flocked the stadium in large numbers. The Indian fans are famous for making the stadium atmosphere contagious with their high-octane energy in the stands. After the match ended in India's favour, a video of a New Zealand fan chanting "Bharat Mata Ki Jai" went viral online. The 16-second-long video, shot during the 2nd T20I, shows a young New Zealand fan learning "Bharat Mata Ki Jai" chant from Indian supporters sitting behind him.

During #INDvNZ 2nd T20I, a certain New Zealander became an Indian supporter for a while when he chanted 'Bharat Mata Ki Jai' and a motivating slogan for the 'Men in Blue'. pic.twitter.com/Z3MbL1CJMD

Talking about the match, it was a see-saw affair with both teams dominating different phases of the game.

After being put in to bat by New Zealand skipper Kane Williamson, Indian openers Rohit Sharma and KL Rahul got the visitors off to an explosive start as they added 69 runs in the powerplay --  that too without losing any wicket.

However, New Zealand bowlers came back strongly and removed picked three wickets in quick succession to get their side back in the game.

India failed to make most of the explosive start they had in the first six overs and posted 179/5 in 20 overs.

When New Zealand came out to bat, they looked a completely different side. After their openers gave them a solid start, Williamson played a brilliant knock, scoring 95 off 48 balls, and almost took the game away from India.

However, he got out in the final over and the match ended in a tie after the hosts failed to score three runs in last five balls off a Mohammed Shami over.

The match went to a Super Over and Williamson once again tilted the tide in New Zealand's favour, hitting a six and a four to set an 18-run target for India.

Rohit, who had struggled on first two deliveries of the Super Over, dispatched last two balls into the stands to hand India a thrilling victory.

With this win, India registered their first-ever T20I series win in New Zealand with two matches still left to play.