With India 2-0 up in the five-match T20 International series, New Zealand have a mountain to climb to stay alive in the series. 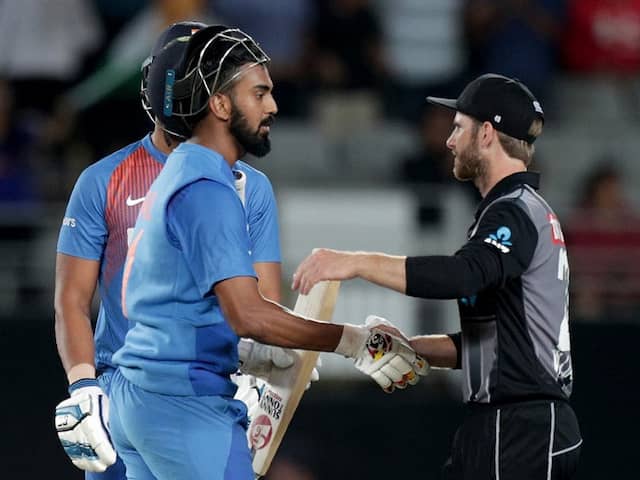 KL Rahul has been the man in form for India this series.© AFP

India will look to take an unassailable lead in the five-match series when they take on New Zealand in the third T20I in Hamilton on Wednesday. India already have a 2-0 lead, having won the first two matches in Auckland, and will look to seal the series with two matches to play. India were made to chase in both the matches so far and they came out on top in contrasting circumstances. KL Rahul and Shreyas Iyer have been the two biggest performers with the bat for India while the bowling unit has worked well in tandem.

KL Rahul, with two fifties in two matches to his name, will look to carry on his rich vein of form. After blasting 56 off 27 deliveries in the first T20I while chasing 204, he was more watchful in the second outing with India chasing 133 and having lost a couple of early wickets.

Playing as an opener in Shikhar Dhawan's absence, KL Rahul has made himself difficult to drop with a string of impressive performances.

Iyer too has made the no.4 position his own with scores of 58 and 44 to back up his impressive show of form in the previous ODI series at home against Australia.

Their continued run of form will be a major boost for captain Virat Kohli and the team management, as it makes it easier for them to narrow down on their team for the T20 World Cup in Australia in October this year.

Navdeep Saini, who missed out on the first two matches, may be given the nod ahead of Shardul Thakur, who has given away the most runs per over for India in both the matches so far this series.

New Zealand will need a much-improved show to stand a chance at turning this series around. While they fired with the bat in the first match, their bowling in both matches has left something to be desired.

Despite India losing the big wicket of Rohit Sharma early on in both matches, New Zealand failed to capitalise and could not stop the visitors from settling in and putting up big partnerships.

New Zealand Cricket Team New Zealand vs India, 3rd T20I Cricket
Get the latest Cricket news, check out the India cricket schedule, Cricket live score . Like us on Facebook or follow us on Twitter for more sports updates. You can also download the NDTV Cricket app for Android or iOS.