Luck vs Skill: How Winning The Toss Is Affecting Outcome Of IPL Matches

Statistics indicate that the toss has become a huge factor in deciding T20 matches.

In the trade-off between luck-versus-skill, has the element of luck in winning or losing the toss now become far too important? In the IPL, winning the toss and choosing to bat second, improves the chance of winning by as much as 40%. Of the 364 matches played in the IPL over the last 6 years, the team batting first won only 150 matches, while the team batting second won 214 matches. 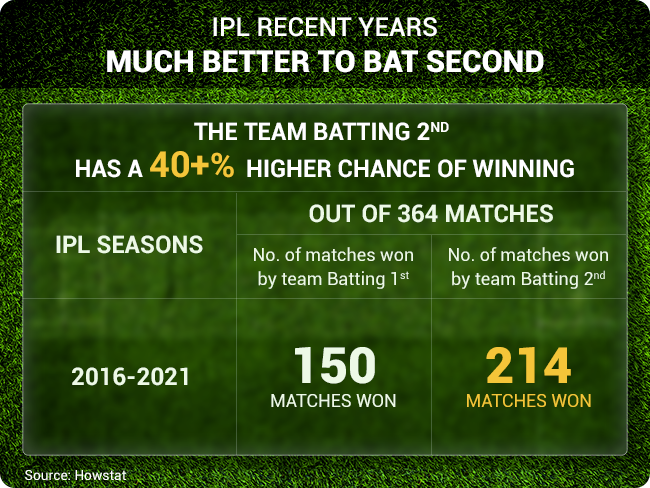 To start a match with a 40% higher chance of winning based on the pure luck of winning the toss goes against the basic tenet that cricket is primarily a game of skill. It is also clear that most captains who win the toss opt to bat second. Everyone now knows about "the-luck-of-the-toss".

Former Indian Cricketer Saba Karim says, "The trend is quite startling. It is similar to the national T20 trends. The emergence of strong power hitters has propelled the teams to rework their strategy. They feel if you have batters till No.5 or No.6, it is better to chase. In shorter formats, the teams batting second have more chance to pull off a win."

"The other important thing is the dew factor," says S Rajesh, Stats Editor of ESPNCricinfo. "If you are looking at the last few seasons particularly 2019 and 2021 there has been a distinct advantage for the team bowling first. For the first five, seven overs they can bowl with a drier ball."

The table shows that clearly every team seems to be aware of the luck of the toss and batting second - 76% of lucky captains who win the toss decide to field first. 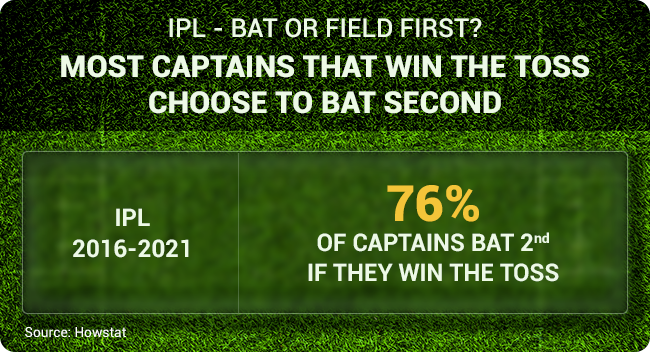 Putting runs on the board no longer seem to make them feel safe. Instead, they are looking to score 200 plus.

Sports Broadcaster Seth Bennet, who's based in the UK and follows leagues across the globe says, "One has seen a change in mindset across the whole of cricket world where the batters are able to deliver their skill under pressure. The onus is on the bowlers to go back and see what they can do."

The importance of the luck-of-the-toss is a new phenomenon: in the period before 2016, the team that batted second won 50% of the matches - a very different game to the IPL of today where now luck matters so much more than earlier.

In this earlier period of the IPL (2008-2015) i.e., when batting first or second didn't make much difference, captains who won the toss also selected to bat first in 50% of the matches.

What should be done? Is there any way this excessive element of luck can be remedied? One possibility is that in the two matches that teams play against each other in the IPL league: the first match is decided with a toss. However, in the second match that they play against each other, there is no toss undertaken: the team that lost the toss in the first match is assumed to have won the toss in the re-match and can decide whether to bat or field first.

Comments
Topics mentioned in this article
IPL 2022 Cricket
Get the latest updates on ICC T20 Worldcup 2022, check out the Schedule and Live Score. Like us on Facebook or follow us on Twitter for more sports updates. You can also download the NDTV Cricket app for Android or iOS.