Royal Challengers Bangalore made it to the IPL 2022 playoffs after Mumbai Indians did them a huge favour by beating Delhi Capitals by five wickets at the Wankhede Stadium on Saturday. 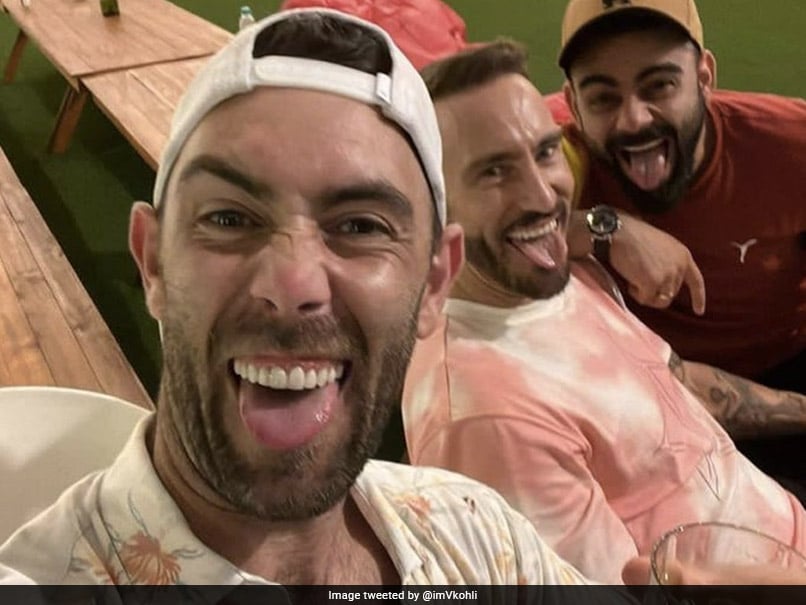 Royal Challengers Bangalore made it to the IPL 2022 playoffs after Mumbai Indians did them a huge favour by beating Delhi Capitals by five wickets at the Wankhede Stadium on Saturday night. Had DC beaten Mumbai, they would have qualified for the playoffs while RCB would have missed out. But a 34-run blitz from Tim David, juxtaposed with some strange decisions from DC, saw MI emerge victorious. It was no surprise that the RCB team was over the moon with the result and some of the players, including former skipper Virat Kohli took to social media to share their elation.

Kohli first tweeted a plane emoji with Kolkata written next to it, to signify that RCB were heading for the playoffs.

A few hours later, Virat Kohli shared a picture with RCB teammates Faf du Plessis and Glenn Maxwell, all three with their tongues out.

Kohli captioned the post: "Feels" with a red heart emoji to go with it. Kohli's post went viral in Twitter, garnering over 120k 'likes' and over 9,000 'retweets'.

On Saturday, it came right down to the wire as Delhi Capitals lost the toss and were put into bat.

Jasprit Bumrah was almost unplayable and took three wickets for 25 runs off his four overs as DC could only post 159 for seven. Rovman Powell was the top-scorer with 43 runs off 34 balls.

In the chase, MI lost Rohit Sharma early but Ishan Kishan and Dewald Brevis kept MI ticking with a fine partnership. In the end, Tim David came and blasted 34 runs off just 11 balls to help MI reach the target with five balls to spare.

Glenn Maxwell IPL 2022 Mumbai Indians vs Delhi Capitals, Match 69 Cricket
Get the latest updates on ICC T20 Worldcup 2022, check out the Schedule and Live Score. Like us on Facebook or follow us on Twitter for more sports updates. You can also download the NDTV Cricket app for Android or iOS.