In a video shared by GT, Rashid was seen giving flying kisses to Agastya, while Hardik held the latter in his arms 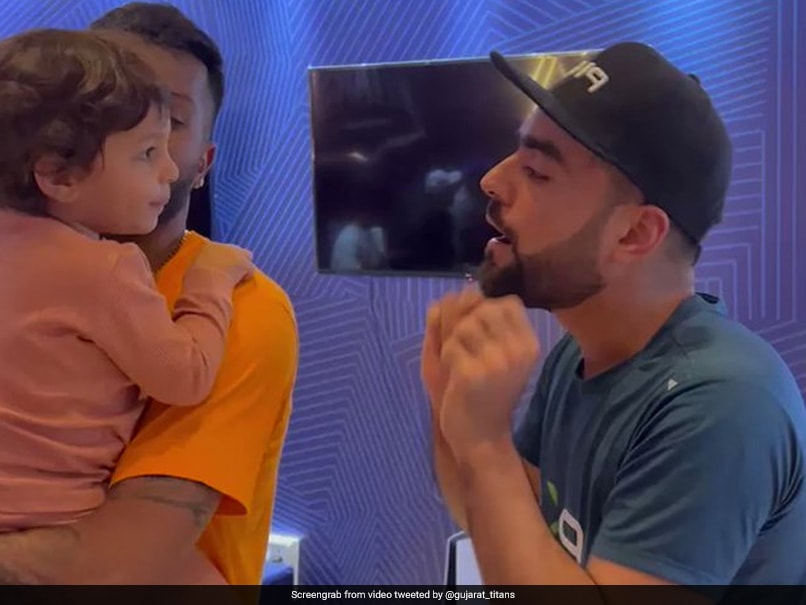 Screengrab from a video posted by GT which shows Hardik Pandya, his son and Rashid Khan.© Twitter

Gujarat Titans are enjoying an excellent debut season in the Indian Premier League. The Hardik Pandya-led side is currently top the table with eight wins in 10 matches so far. Vice-captain Rashid Khan, who has been in excellent form with the bat for GT, was seen having some fun time skipper Hardik's son Agastya. In a video shared by GT, Rashid was seen giving flying kisses to Agastya, while Hardik held the latter in his arms. Agastya also gave a flying kiss to Rashid before both shared an adorable giggle.

GT suffered just their second defeat of the campaign in their last game as they were narrowly beaten by the Punjab Kings.

After opting to bat, GT were restricted to 143 for eight, despite Sai Sudarshan (65 not out) scoring his maiden IPL fifty.

For PBKS, Kagiso Rabada starred with the ball, taking four for 33 in spell of four overs.

Chasing a target of 144, Shikhar Dhawan laid a strong foundation for PBKS' chase and remained unbeaten on 62 off 53.

Apart from Dhawan, Bhanuka Rajapaksa and Liam Livingstone also played quickfire knocks of 40 and 30 not out, respectively.

Livingstone stole the show, hitting Mohammed Shami for 28 off the last over.

With the win, PBKS moved up to fifth on the IPL 2022 points table with 10 points so far in as many games.

GT, on the other hand, remain top of the table and will now take on Mumbai Indians on Friday, May 6.