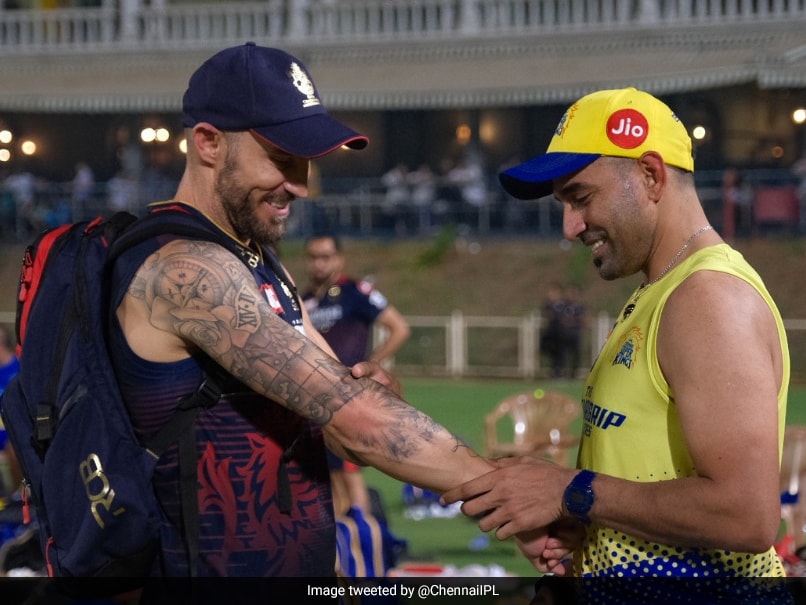 Watch: Faf du Plessis reunited with his former teammates ahead of the match vs CSK.© BCCI

Fans will be in for a treat as the Chennai Super Kings (CSK) face Royal Challengers Bangalore (RCB) in a blockbuster clash in the ongoing season of the Indian Premier League (IPL) on Tuesday. Ahead of the crunch encounter, RCB captain Faf du Plessis, who was part of CSK squad until last season, reunited with his former teammates. The video was shared by CSK on their official social media pages. In the video, Faf can be seen interacting with CSK players and support staff ahead of the hugely anticipated fixture.

Du Plessis, who played an important part in CSK's title triumph last season, was released by the franchise ahead of the mega auction.

The former South Africa skipper was bought by RCB for Rs 7 crore at the auction.

He was later named as the captain of the team ahead of the start of the ongoing season.

On facing his former team, du Plessis said: "We're obviously playing some nice cricket at the moment, so we've got a bit of form going into the match. But we also know that Chennai are a team that you can never write off."

"They've got some incredible cricketers there. So, it's going to be a great game, and I'm looking forward to that. (Australian pacer Josh) Hazlewood has joined us, it's nice for him as well; it's his first game back, and he's also playing against his old team," he added.

RCB are on a three-match winning run, having lost their opening game of the season against Punjab Kings.

CSK, on the other hand, are yet to win a game after four outings so far.

Ravindra Jadeja Dr DY Patil Sports Academy, Navi Mumbai IPL 2022 Cricket Chennai Super Kings vs Royal Challengers Bangalore, Match 22
Get the latest updates on ICC T20 Worldcup 2022 and CWG 2022 check out the Schedule, Live Score and Medals Tally. Like us on Facebook or follow us on Twitter for more sports updates. You can also download the NDTV Cricket app for Android or iOS.