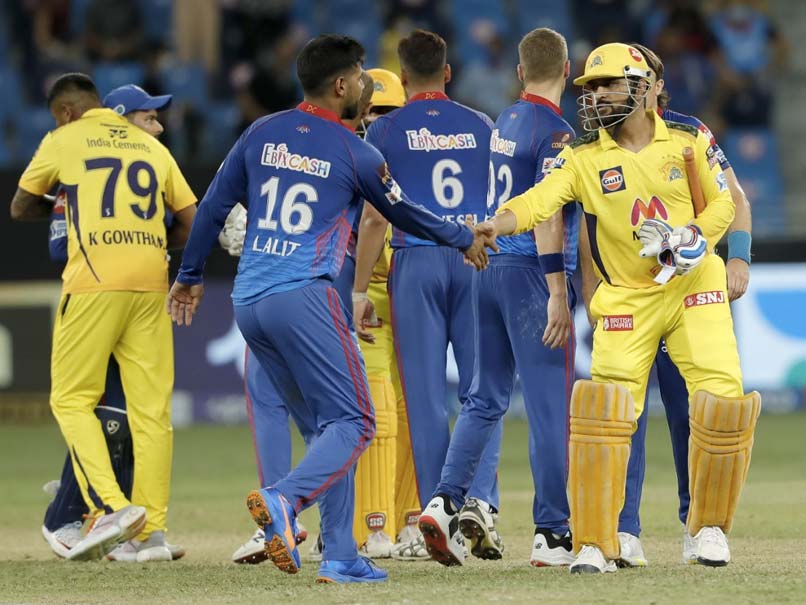 In the end it was about experience and knowing what it takes to win a big match. Mahendra Singh Dhoni did what many thought he couldn't do anymore, which was to come in and belt a few to the boundary and take his team home. Chennai Super Kings entered the IPL 2021 final, their 9th in the history of the league, as they edged out Delhi Capitals by 4 wickets. Dhoni hit 3 boundaries and a six in his 6-ball unbeaten knock of 18 runs to help his team reach the target of 173 runs with 3 balls to spare as he reminded Avesh Khan and Tom Curran that they can't bowl short of length balls to him even when he is 40 years old.  Dhoni's late heroics were the icing on the cake after his former India teammate Robin Uthappa and the ever-improving Ruturaj Gaikwad had set the stage for a grandstand finish.

Uthappa and Gaikwad came together in the very first over of the high-pressure chase after Anrich Nortje removed the in-form Faf Du Plessis for 1. Both the batsmen threw caution to the wind as they attacked Delhi's bowlers from the word go. Gaikwad was all class while Uthappa reminded the Indian cricket fans that he still had the flair and power of yesteryears in his batting. While Ruturaj has been in great from this season, Uthappa hadn't got too many opportunities to bat long in the middle for his new franchise. But he paid back the faith shown in him by the team management with a timely knock.

Uthappa took a heavy toll on the young Avesh Khan in the powerplay and went on to complete his half-century in just 35 deliveries to keep CSK abreast with the asking rate. With 62 runs to win in 7 overs, CSK looked like they were home and dry but Uthappa's dismissal for 63 triggered a mini-collapse as pinch-hitter Shardul Thakur and Ambati Rayudu were dismissed in quick succession.

Ruturaj though continued in his quest and brought up his half-century in the company of Moeen Ali, who got a few lusty blows away to keep the required rate in check. Avesh Khan dismissed Ruturaj for 70 on the first ball of the 19th over as CSK now needed 24 runs off 11 deliveries. Many thought the in-form Ravindra Jadeja might walk out but captain MS Dhoni decided to take the responsibility despite his poor form with the bat this season.

While Moeen Ali got a boundary and a single away, it was Dhoni's six off the penultimate delivery of the over that swung the match CSK's way as they needed 13 runs to win off the last over. Tom Curran was handed the ball for the last over in place of the experienced Kagiso Rabada and the Englishman removed Ali to keep Delhi in the hunt. But what followed was vintage Dhoni as he hit back-to-back boundaries to bring the equation down to 5 runs needed off 3 deliveries.

A nervous Curran bowled a wide thereafter and Dhoni hit the next delivery to the boundary again to finish the job.

Earlier, Delhi Capitals posted 172 runs in their 20 overs on the back of a solid start given to the innings by opener Prithvi Shaw. The diminutive batsman scored 60 runs off 34 deliveries to get the team off to flyer despite Shikhar Dhawan and Shreyas Iyer getting out cheaply. Captain Rishabh Pant (51 off 35) and Shimron Hetmyer (37 off 24) produced the big hits in the death overs to take the team to a formidable total but eventually it wasn't enough.

Shimron Hetmyer Prithvi Shaw Cricket
Get the latest updates on ICC T20 Worldcup 2022 and CWG 2022 check out the Schedule, Live Score and Medals Tally. Like us on Facebook or follow us on Twitter for more sports updates. You can also download the NDTV Cricket app for Android or iOS.