IPL 2021: Harbhajan Singh will be representing Kolkata Knight Riders (KKR) in the upcoming Indian Premier League season. The spinner has cleared his quarantine period and has begun training. 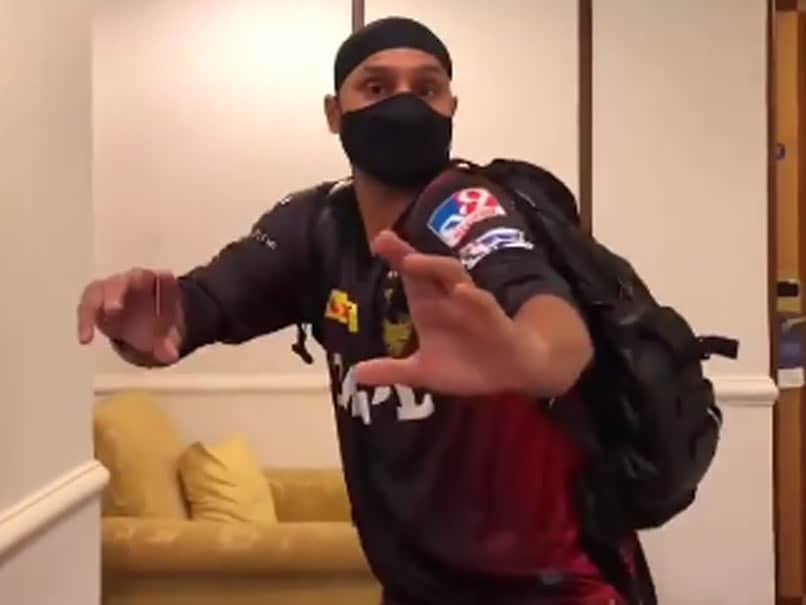 IPL 2021: Harbhajan Singh was acquired by KKR for his base price during the recent auction.© Instagram

Having finished his seven-day quarantine period, Harbhajan Singh has begun training with Kolkata Knight Riders (KKR) for the upcoming Indian Premier League (IPL) 2021. The Indian spinner was acquired by KKR during the IPL Auction for his base price of Rs 2 crore. He arrived at KKR's bio-secure bubble on March 27 and was put into mandatory quarantine. On Saturday, KKR posted a video of him coming out of his hotel room, and the spinner also announced that his result was negative.

In the video, Harbhajan looks excited at the prospect of starting his outdoor training. Before leaving his bio-secure bubble, he even shows a few dance moves.

In the video, he can also be seen exchanging a few words with former captain Dinesh Karthik, before joining the rest of his teammates for training.

He was part of CSK's title-winning run in the 2018 season, taking seven wickets in 13 matches. He also represented CSK in IPL 2019, where they lost to Mumbai Indians (MI) in the final.

Harbhajan was also expected to feature for CSK in IPL 2020 at the United Aram Emirates (UAE), but he pulled out due to personal reasons. IPL 2020 was shifted to the UAE, due to the coronavirus pandemic.

CSK had a poor campaign in the UAE, finishing seventh in an eight-team table.

KKR also didn't fare too well, finishing fifth in the league phase and missing out on a playoff spot.

Other than Harbhajan, KKR also roped in Shakib Al Hasan for Rs 3.2 crore and Ben Cutting for Rs 75 Lakh during the IPL 2021 Auction.

IPL 2021 is set to begin on April 9, with defending champions Mumbai Indians taking on Royal Challengers Bangalore (RCB) in the season opener.

KKR have their first match on April 11, when they face SunRisers Hyderabad (SRH).

Dinesh Karthik IPL 2021 Cricket
Get the latest updates on India vs Australia and check out  Schedule, Results and Live Score. Like us on Facebook or follow us on Twitter for more sports updates. You can also download the NDTV Cricket app for Android or iOS.