IPL 2021: 'Universe Boss' Chris Gayle showed that his skills are not limited to cricket alone. 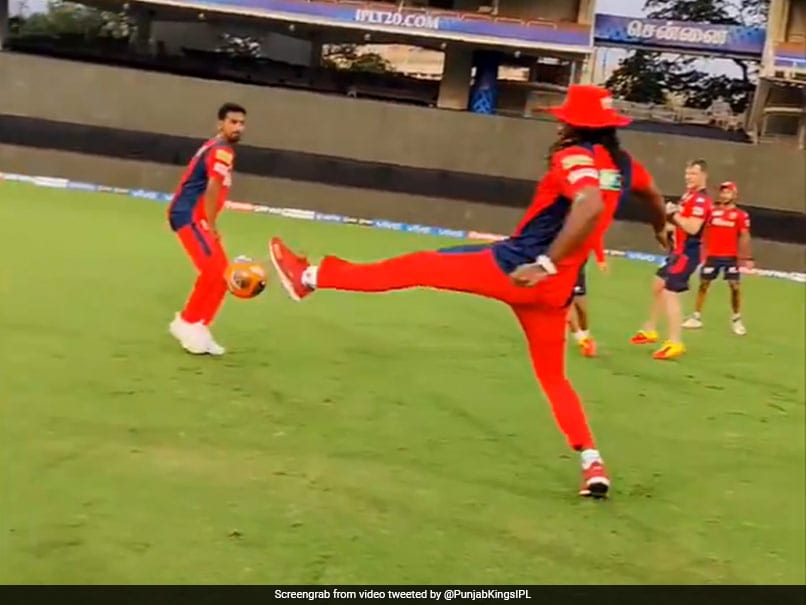 Self-proclaimed Universe Boss Chris Gayle is known for finishing cricket matches for his side. However, in an interesting turn of events, Gayle on Wednesday used his 'finishing touches' to score a goal during the Indian Premier League (IPL) team Punjab Kings' practice session. PBKS played their last match against Kolkata Knight Riders (KKR) on Monday and the KL Rahul-led outfit is enjoying a short break from their packed IPL schedule. Punjab will next take on Virat Kohli's Royal Challengers Bangalore (RCB) on Friday.

Sharing the short clip on Twitter, Punjab Kings wrote, "Be it football or cricket, #UniverseBoss certainly knows how to apply finishing touches."

Soon the comments section was filled by with people showing their admiration for Gayle.

"Waiting for him to perform like a storm, after all, universe boss," a fan wrote in the comment section.

waiting him to perform like a strom
afterall universe boss

"UNIVERSE BOSS FOR A REASON," wrote another user.

UNIVERSE BOSS FOR A REASON

Another follower of the team asked the franchise to play him as an opener. "PLAY HIM AT 1," he said.

"Play football, but don't play with our emotions," wrote a PBKS fan in the comment section.

Play football, but don't play with our emotions....

The KL Rahul-led outfit has not done well in IPL 2021 thus far. Punjab have won just two games from their opening six games and are placed in the bottom half of the points table.

Punjab started the 14th edition of the cash-rich league on a positive note by defeating Rajasthan Royals (RR) by four runs in a last-over thriller.

However, they failed to cash in on the victory, as they lost their next three games at the hands of Chennai Super Kings (CSK), Delhi Capitals (DC) and Sunrisers Hyderabad (SRH). A resurgent Punjab hammered reigning champions Mumbai Indians (MI) by nine wickets.

But in their next match, they were beaten by a struggling Kolkata Knight Riders (KKR) by five wickets.

Chris Gayle IPL 2021 Cricket
Get the latest updates on India vs South Africa and check out  Schedule, Results and Live Score. Like us on Facebook or follow us on Twitter for more sports updates. You can also download the NDTV Cricket app for Android or iOS.