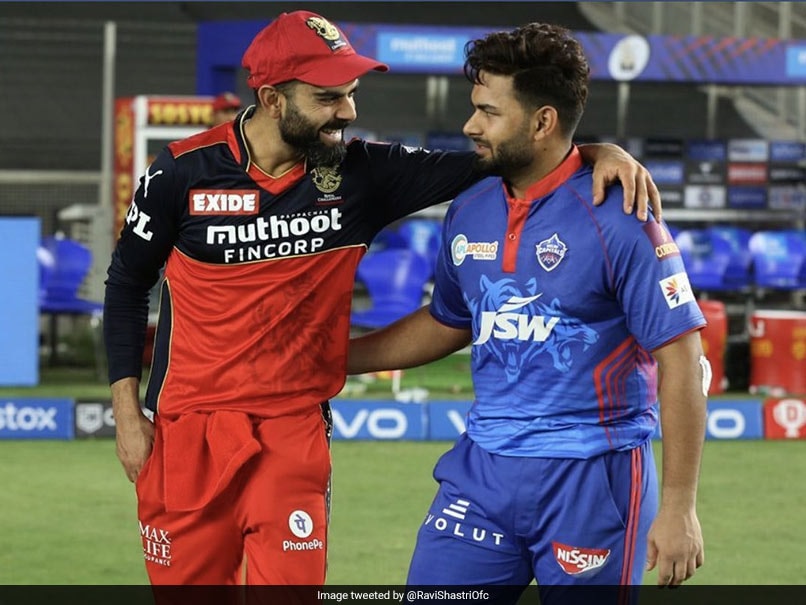 Royal Challengers Bangalore and Delhi Capitals are yet to win an IPL trophy.© Twitter

Royal Challengers Bangalore(RCB) and Delhi Capitals (DC) put on a thrilling contest on Tuesday where Virat Kohli's side managed to secure a close one-run win on the last ball of the match. India men's cricket team's head coach Ravi Shastri took to Twitter on Wednesday to share a picture of Virat Kohli and Rishabh Pant, applauding the contest and said that he feels Indian Premier League (IPL) 2021 might see a potential new winner. Both RCB and DC are yet to get their hands on the IPL trophy.

After their win on Tuesday, RCB are now on top of the IPL 2021 points table. The Kohli-led outfit have 10 points from six matches.

Delhi Capitals, who were the runners up last year, are third on the points table with four wins from six matches.

With defending champions Mumbai Indians and Kolkata Knight Riders failing to find consistency this season, Shastri's prediction can come true if both Delhi and RCB continue to play the way they have been playing in the 14th edition of the IPL.

On Tuesday, riding on AB de Villiers' blistering half-century RCB posted a competitive total of 171 for five from their allotted 20 overs after being put in to bat by DC captain Pant.

In reply, Delhi came close thanks to half-centuries from their skipper and Shimron Hetmyer but with six needed off the final ball, Pant could only manage to squeeze a boundary as RCB won the game by one run.

Rishabh Pant Ravi Shastri Delhi Capitals vs Royal Challengers Bangalore, Match 22 Cricket IPL 2021
Get the latest updates on SA vs IND 2021-22, check out the Schedule and Live Score . Like us on Facebook or follow us on Twitter for more sports updates. You can also download the NDTV Cricket app for Android or iOS.