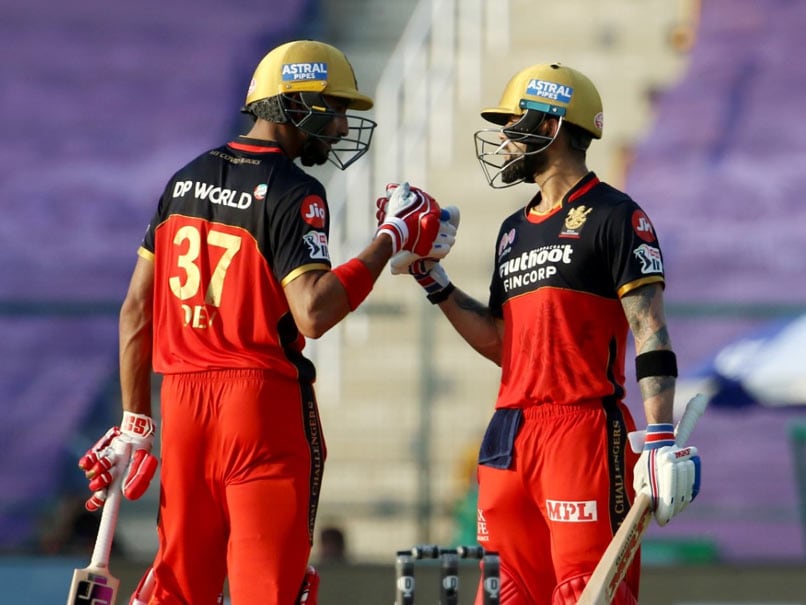 Devdutt Padikkal (63 off 45 balls) and Virat Kohli scored fifties as Royal Challengers Bangalore (RCB) beat Rajasthan Royals by eight wickets in Abu Dhabi on Saturday. Chasing 155 to win, Padikkal lost his opening partner Aaron Finch early but that didn't keep him from playing attacking shots. He combined with skipper Virat Kohli and stitched together an 99-run stand for the second wicket. Padikkal also brought up third fifty of his IPL career in the process. Kohli played the second fiddle initially but opened up after gaining some confidence and notched up his first big score of IPL 2020, smashing 72 not out off 53 balls. AB de Villiers scored a boundary on the first ball of the final over to seal the game in RCB's favour, with five ball to spare. Earlier, late fireworks from Rahul Tewatia (24 not out off 12 balls) and a fine knock from Mahipal Lomror (47 runs) helped Rajasthan recover from early blows and set a 155-run target. Batting first they started positively, with Jos Buttler taking the aggressive approach. RCB bowlers came back strongly to dismiss their three top-order players in quick succession and pushed them on the backfoot. Isuru Udana dismissed Steve Smith to hand RCB the first breakthrough. Navdeep Saini struck off his very first delivery to end Jos Buttler's mini-onslaught who departed after scoring 22 off 12 balls. Kohli introduced Yuzvendra Chahal in the next over and he delivered immediately, removing dangerous Sanju Samson to further derail the Rajasthan innings. Mahipal Lomror, playing his first match of the season, made an immediate impact, scoring 47 runs. However, none of the batsman could lend him the support he needed and he eventually fell three short of his fifty, trying to up the ante. (SCORECARD)