RCB gave a funny caption to their post as if to suggest that Lionel Messi needs someone like Virat Kohli to bring the Catalan giants back to their glory days. 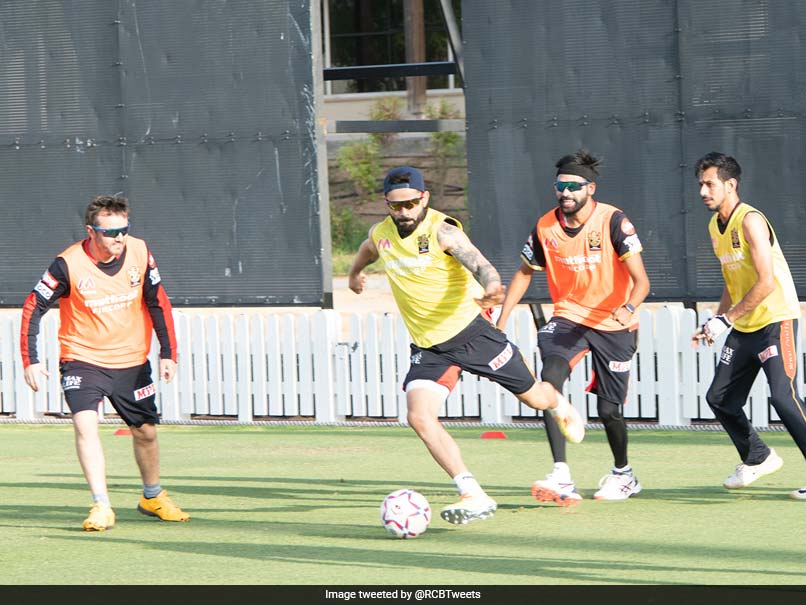 RCB posted a picture of Virat Kohli playing football with his teammates at the training ground.© Twitter

Lionel Messi's desire to leave Barcelona was the talk of the town for several weeks. However, after a long tussle between him and club president Josep Bartomeu, the Argentine talisman on Friday confirmed, rather reluctantly, that he will be staying at Barcelona because he didn't want to drag the club to the court. After a long drama, Messi is staying at Barcelona and that should be a good news for his fans. However, now the focus has shifted to players who might join the 33-year-old before the start of the new season. Sensing the funny side to the whole issue, the Indian Premier League (IPL) franchise Royal Challengers Bangalore (RCB), who are currently training in Dubai, shared a picture of their skipper Virat Kohli playing football with his teammates, with a rather funny caption as if to suggest that Messi needs someone like Kohli to bring the Catalan giants back to their glory days. Just like Messi, Kohli can be seen getting himself in position to strike the football with his left foot. "We heard Messi was looking for some new teammates. #PlayBold #IPL2020 #WeAreChallengers," read RCB's caption.

Virat Kohli's football skills is definitely nowhere near that of Messi, who is regarded by many as the best player to have ever played the sport. However, it was sure good enough to leave England striker Harry Kane impressed, who commented on one of Kohli's Instagram posts, praising his "nice technique".

Kohli, like many cricketers, loves to play football during warm-ups before getting on with his real training. While Kohli's football skills are not up to the level to warrant him a place in the Barcelona squad but the Spanish giants definitely need a strong character like Kohli who can offload some of the pressures of Messi's shoulders, allowing him to weave his magic on the field.

Barcelona begin their next season at home against Villarreal on September 29, while RCB are yet to get hold of their IPL 2020 fixtures list, which is expected to be announced later on Sunday.