MS Dhoni on Monday reached Chennai to begin his preparations for the upcoming edition of the IPL. 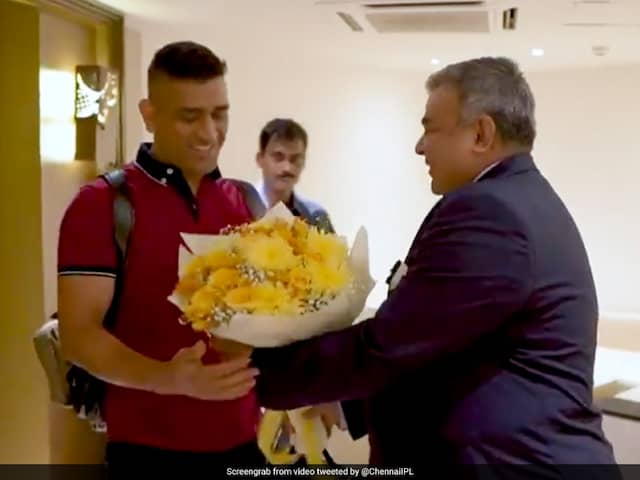 MS Dhoni, who has been out of competitive cricketing action for the last seven months, is all set to return to the field in the Indian Premier League (IPL 2020), scheduled to start on March 29. The former India skipper on Monday reached Chennai to begin his preparations for the upcoming edition of the IPL. Chennai Super Kings (CSK), the franchise MS Dhoni leads in the IPL, shared a video on their official Twitter handle. "Every goose shall bump with First Day First Show feels! Just #StartTheWhistles! #HomeSweetDen," CSK captioned the video. The 59-second-long video shows Dhoni leaving the airport terminal in the company of security officials. The video also shows MS Dhoni entering a hotel after shaking hands with the guard.

Dhoni, who has kept different hairstyles in his long playing career, can be seen sporting a new hairstyle.

Chennai Super Kings will start their campaign against defending champions Mumbai Indians at the Wankhede Stadium on March 29.

After Mumbai Indians, who have won four IPL trophies, CSK are the second most successful IPL side with three title wins.

Last year, they suffered a narrow defeat in the summit clash and would want to go all the way this season.

According to CSK Chief Executive Officer (CEO) KS Viswanathan, Dhoni will start his training at the MA Chidambaram Stadium and will be joined in by some of his IPL teammates.

"Dhoni will train at the MA Chidambaram stadium from March 2. He will practice with players who are available at that time," CSK CEO KS Viswanathan said in Chennai.

"The full camp will begin on 19 March when all the players would have joined the squad," he added.

The 38-year old has not played any international match since the India lost to New Zealand in the semi-final of 2019 World Cup in July last year.

Dhoni's constant absence from the Indian team saw him lose his spot in the BCCI's list of centrally contracted players in January.

CSK have retained their core group of players in their squad for the upcoming season. In the auction, CSK spent a huge amount to avail the services of leg-spinner Piyush Chawla. Apart from Chawla, CSK have also bought Josh Hazlewood and Tom Curran in the annual auction held in December last year.

MA Chidambaram Stadium, Chennai IPL 2020 Cricket
Get the latest updates on IPL 2020, check out the IPL Schedule for 2020 and Indian Premier League (IPL) Cricket live score . Like us on Facebook or follow us on Twitter for more sports updates. You can also download the NDTV Cricket app for Android or iOS.