KXIP vs RR: Chris Gayle smashed Rajasthan Royals bowlers to all corners of Abu Dhabi before being cleaned up by Jofra Archer on 99. 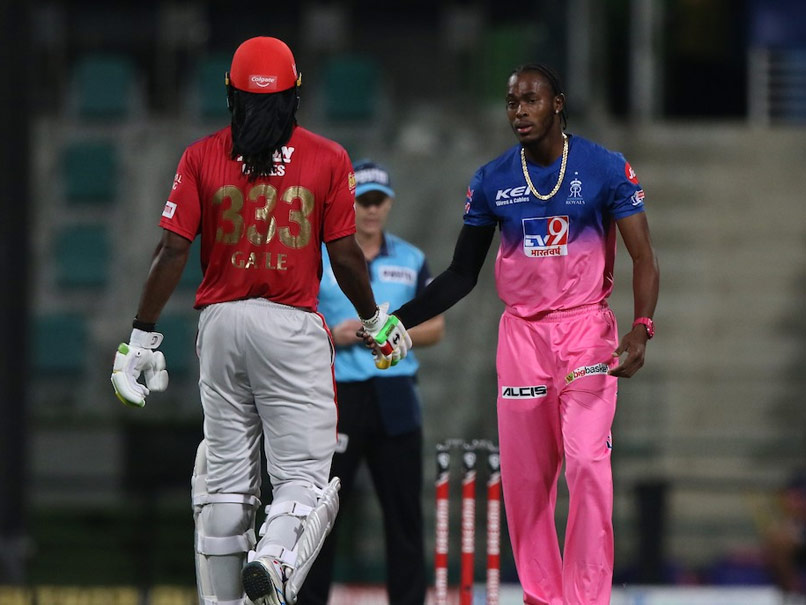 KXIP vs RR: Jofra Archer dismissed Chris Gayle on 99 but later tipped his hat to the big Jamaican.© BCCI/IPL

Chris Gayle proved once again that age is just a number and why he goes by the name of 'Universe Boss' as he bashed Rajasthan Royals bowlers all over Abu Dhabi on Friday. Though, his innings went in vain as Rajasthan Royals secured a seven-wicket win over Kings XI Punjab, the big-hitting Jamaican won many plaudits for his whirlwind knock, including from the man who dismissed him on 99. Gayle needed just a single to score his seventh IPL hundred but was cleaned up by RR pacer Jofra Archer in the final over. The England fast bowler, however, took to Twitter after the match and admitted that Chris Gayle was "still the boss", a thought many bowlers around the world would agree with.

In the larger scheme of things, the win was crucial for Rajasthan Royals' bid to reach the playoffs. A loss would have ended their hopes of getting into the top four.

The victory in Abu Dhabi helped RR climb to fifth in the table, level on points with fourth-placed Kings XI Punjab, who have a better run-rate than RR. However, both teams will drop a place if SunRisers Hyderabad beat Royal Challengers Bangalore in Sharjah later today.

For Rajasthan, apart from Archer starring with the ball again, Ben Stokes was the hero with the bat. The England all-rounder smashed 50 off just 26 balls to get RR off to a flyer. Sanju Samson too was brilliant, scoring 48 off 25 balls, unfortunately run out just when he was looking to explode.

Steve Smith (31 not out) and Jos Buttler (22) added the finishing touches to RR's impressive chase.

Sanju Samson IPL 2020 Kings XI Punjab vs Rajasthan Royals, Match 50 Cricket
Get the latest updates on IPL Auction 2023 and check out  IPL 2023 and Live Cricket Score. Like us on Facebook or follow us on Twitter for more sports updates. You can also download the NDTV Cricket app for Android or iOS.