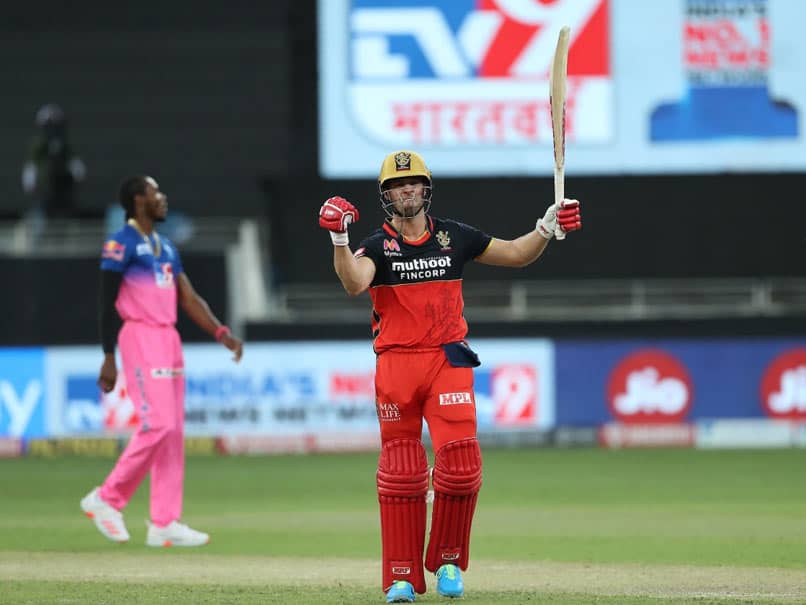 AB de Villiers' masterclass (55 not out off just 22 balls) helped Royal Challengers Bangalore (RCB) stage a great comeback and beat Rajasthan Royals by seven wickets in a thrilling encounter at the Dubai International Cricket Stadium on Saturday. With 35 required from last two overs and ball not coming on to the bat nicely, the match seemed to be slipping away from RCB's hands but de Villiers had some other plans. Steve Smith decided to bowl Jaydev Unadkat instead of Jofra Archer in the penultimate over and that costed them dear as RCB wicket-keeper smashed him for three consecutive sixes off first three balls to take the game away from them. Gurkeerat Singh Mann also scored a crucial boundary in the 19th over, bringing down the equation to 10 off six balls. De Villiers finished things off in style by smashing Archer's fourth delivery over deep midwicket fence.

Chasing 178 to win, RCB got off to decent start, with Aaron Finch hitting two huge sixes early on. However, he could not covert his start and departed after scoring 14 runs. Young Devdut Padikkal along with skipper Virat Kohli batted sensibly as they reached 47/1 after six overs.

The highlight of the 79-run stand between the duo was the running between wickets. They played with soft hands and made most of longer dimensions on one side of the ground.

However, they both departed in quick succession, leaving a lot for de Villiers to accomplish. The former South African skipper took the game deep and launched at the right time to seal the victory for his side.

Earlier, Robin Uthappa, opening the innings for the first time this season, got Rajasthan Royals off to a flying start in the first six overs. While his partner Ben Stokes failed with the bat once again, Uthappa's knock helped Rajasthan reach 52/1 at the end of Powerplay.

Yuzvendra Chahal struck twice in the eighth over, removing both Uthappa and Sanju Samson to pull things back for RCB.

Buttler got out after scoring 24 off 24 balls, but Smith carried on and completed his half-century. Smith accelerated towards the end and a cameo from Rahul Tewatia (19 off 11 balls) helped Rajasthan post a competitive total of 177/6 on a slow wicket.

After collecting 19 and 15 runs in the 18th and 19th overs respectively, Rajasthan were on course to a total of in excess of 180 runs but Chris Morris bowler a brilliant final over, conceding just four runs and picking two wickets, to stop them from attaining that target.

Morris was the most successful bowler for RCB and returned with an impressive figures of 4/26, while Chahal was a tad expensive than usual as he gave away 34 runs, with 19 of them coming in his final over, but accounted for two big wickets.