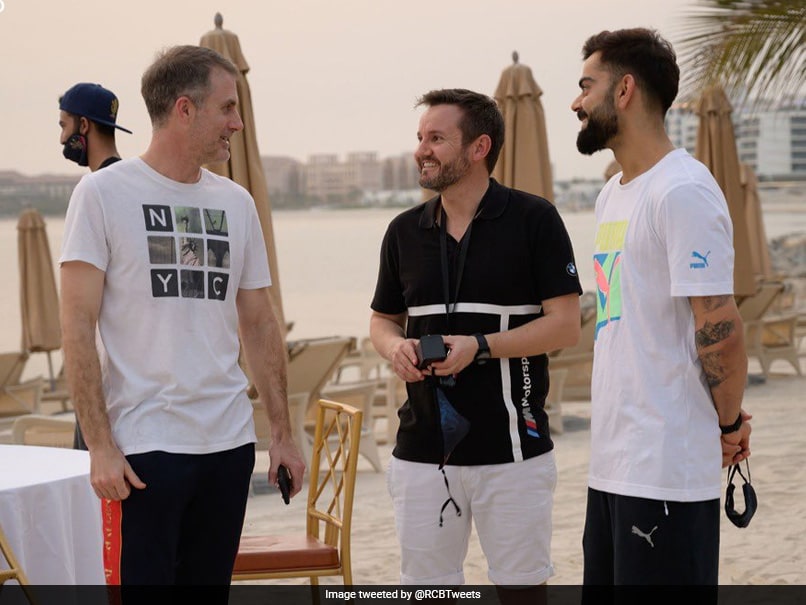 Virat Kohli and Mike Hesson can be seen smiling, as they interact with Simon Katich.© Twitter

Head Coach Simon Katich and Director of Cricket Mike Hesson will be managing the Royal Challengers Bangalore (RCB) for the first time in the upcoming edition of the Indian Premier League (IPL). However, the duo certainly seems to have built rapport with skipper Virat Kohli, despite spending limited time in their new roles as evident from a picture shared by the franchise's official Twitter handle. "The Coach. The Gaffer. The Captain. Safe to say the leadership group is enjoying each other's company," the Tweet read. Kohli and Hesson can be seen smiling, as they interact with former Australian cricketer Katich.

The Coach. The Gaffer. The Captain.

The Team India skipper has ensured a regular workout schedule even during his quarantine period in the United Arab Emirates (UAE). Kohli was seen sweating it out in the hotel room's balcony, as observed in a recent video shared on Twitter by RCB.

Hesson has further looked to ensure proper discipline across all departments, as evident from his remark at bowling coach Adam Griffith who joined a team webinar without wearing his RCB polos. “You look ready for the beach already,” he quipped.

Griffith soon realised his mistake, going on to wear a polo, with the former New Zealand head coach ensuring a cool but firm attitude till the end.

RCB finished eighth in the previous edition of the cash-rich league which will be played across three venues: Sharjah, Abu Dhabi and Dubai. The 13th season of the IPL will get underway on September 19, after being delayed due to the coronavirus pandemic.

Royal Challengers Bangalore Cricket
Get the latest updates on ICC T20 Worldcup 2022, check out the Schedule and Live Score. Like us on Facebook or follow us on Twitter for more sports updates. You can also download the NDTV Cricket app for Android or iOS.