MI vs KXIP, IPL 2020: Chris Gayle and Mayank Agarwal got Kings XI Punjab across the finish line against the defending champions Mumbai Indians in a historic IPL 2020 match that was decided in the second Super Over. 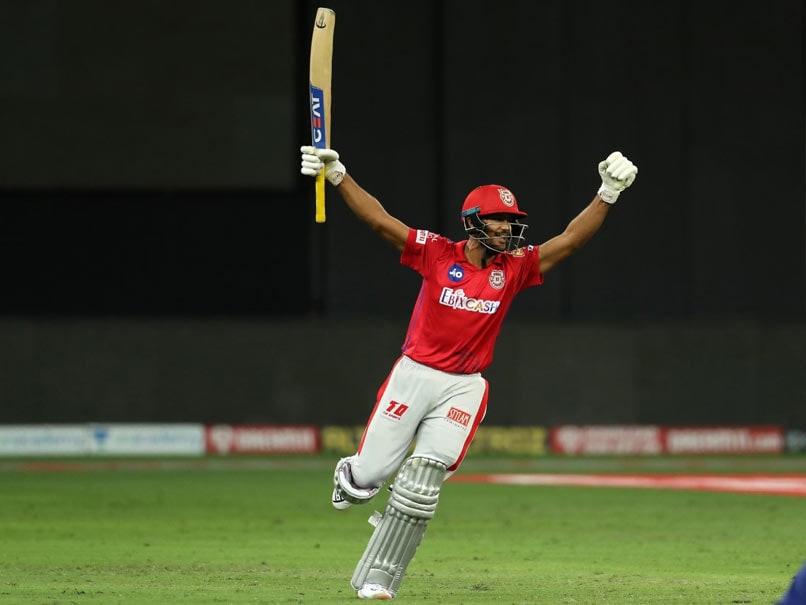 Chris Gayle and Mayank Agarwal got Kings XI Punjab across the finish line against the defending champions Mumbai Indians in a historic IPL 2020 match that was decided in the second Super Over at the Dubai International Stadium on Sunday. For the first time in the history of the game, the scores were tied at the end of regulation 20 overs and then the first Super Over. But Mayank Agarwal and Chris Gayle scored 15 runs without any loss in the second Super Over to add two crucial points to their tally and keep their play-off hopes alive. With this win KXIP have six points from nine games and are tied on points with three other teams, who are fighting for the fourth play-off spot in the eight-team table.

Chris Gayle, who didn't come out to bat in the first Super Over, smashed a six on the very first ball to put Trent Boult under pressure. He took a single on next ball to bring Mayank on strike, who smashed back-to-back boundaries to seal the win, which took them to sixth spot on the points table.

Apart from his heroics with the bat, Mayank's sensational fielding effort at the fence saved four runs and restricted MI to just 11 runs. Kieron Pollard had struck the ball nicely and it seemed as if it will go the distance but Mayank threw himself in the air and pulled the ball, saving crucial runs for his team.

In the first Super Over, KXIP could only manage five runs batting. Jasprit Bumrah got rid of Nicholas Pooran on the second ball and then dismissed Rahul with a toe crushing yorker.

Mohammed Shami, who leaked a lot of runs towards the end in the regulation over, made amends and bowled six great balls to tie the game and take it the second Super Over.

Earlier, KL Rahul played a captain's knock scoring 77 off 51 balls but couldn't finish the job for his side. The game seemed to be slipping away from Mumbai and Rohit handed the ball to Bumrah who bowled a perfect in-swinging yorker at the base of off stump to provide the all-important wicket.

Deepak Hooda (23 not out off 16 balls) and Chris Jordan (13 off 8) collected 13 runs the penultimate over to once again shift the tide in their side's favour. With just nine needed of six balls, the duo managed five runs off first two deliveries, bringing the equation down to four off four balls. However, Trent Boult bowled brilliant last four balls and restricted them to 176/6 after 20 overs.

For Mumbai, Quinton de Kock carried on with his good form and smashed yet another half-century, scoring 53 off 43 balls to lay the foundation for a big finish. Mumbai Indians got off to a terrible start as they lost three wickets inside the Powerplay, with skipper Rohit Sharma, Suryakumar Yadav and Ishan Kishan all back in the pavillion.

de Kock  and Krunal Pandya strung together a crucial 58-run stand for the fourth wicket to steady their innings. Young leg-spinner Ravi Bishnoi dismissed Krunal to break the dangerous stand in the 14th over.

Hardik Pandya smashed a six during his short stay at the crease and departed cheaply for eight runs off Mohammed Shami. de Kock also got out trying to accelerate the innings, leaving Mumbai in a deep state of bother, with two new batsmen at the crease and three overs to play.

However, what transpired after that was a treat to the eyes as Kieron Pollard (unbeaten 34 off 12) and Coulter-Nile (24 not out off 12) collected 54 runs in the last three overs to take their side to an imposing total on a difficult double-paced track.

Pollard cleared the fence twice, while Coulter-Nile smashed two boundaries in the 18th over bowled by Arshdeep Singh.

The Australian all-rounder then picked up two boundaries as Mumbai Indians collected 12 runs in the penultimate over. The big West Indian then smacked two sixes and a four in the final over to cap a 20-run over and finish the innings on a high.

Trent Boult Dubai International Cricket Stadium, Dubai IPL 2020 Cricket Mumbai Indians vs Kings XI Punjab, Match 36
Get the latest updates on India vs South Africa and check out  Schedule, Results and Live Score. Like us on Facebook or follow us on Twitter for more sports updates. You can also download the NDTV Cricket app for Android or iOS.