IPL 2020, KKR vs DC: Nitish Rana scored a quick half-century against Delhi Capitals and dedicated it to his father-in-law Surinder Marwah who died on Friday. 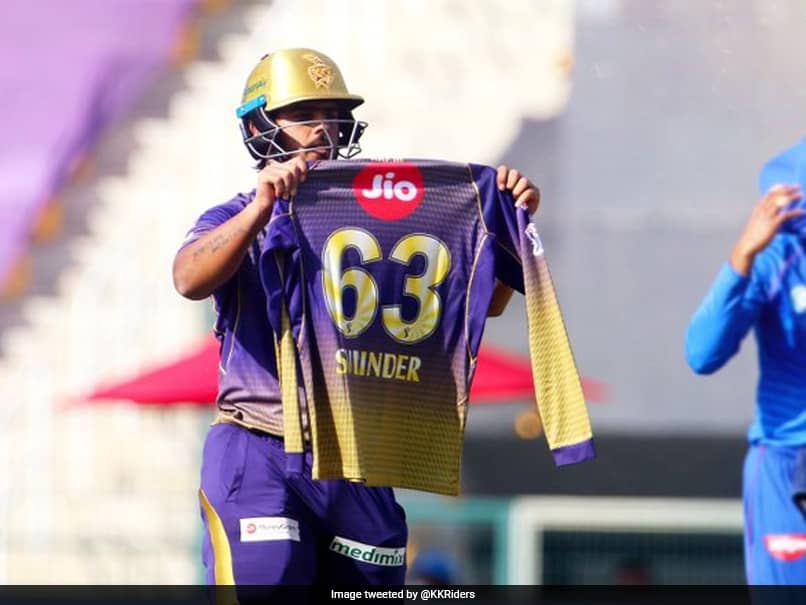 KKR vs DC, IPL 2020: Nitish Rana raised a KKR t-shirt with his father-in-law's name on the back.© Twitter

Kolkata Knight Riders (KKR) batsman Nitish Rana on Saturday scored a quick half-century against Delhi Capitals at the Sheikh Zayed Stadium, Abu Dhabi and dedicated it to his father-in-law Surinder Marwah who died on Friday. Nitish Rana, who was promoted up the order to open the innings with Shubman Gill, smashed Anrich Nortje for a boundary on the last ball of 13th over to bring up his 10th IPL fifty off just 35 deliveries. Soon after reaching his fifty, Rana raised a specially designed KKR t-shirt, with his father-in-law's name inscribed on the back.

He and Sunil Narine combined together to put on a 115-run stand for the fourth wicket in just 56 balls, riding on which KKR posted a huge total of 194/6 in 20 overs.

Sent in to open the innings, @NitishRana_27 responds with a fine and dedicates it to his father in law, who passed away yesterday.#Dream11IPL pic.twitter.com/1LUINkpqpe

After KKR were put in to bat by Delhi Capitals skipper Shreyas Iyer, KKR started poorly losing Shubman Gill (9) and Rahul Tripathi (13) inside the Powerplay. Former skipper Dinesh Karthik's rusty form continued and he got out after edging a ball straight to Rishabh Pant behind stumps.

With their side on the backfoot, KKR decided to send Sunil Narine ahead of skipper Eoin Morgan and it paid off nicely as the West Indian, making a comeback into the side, took the attack to the opposition bowlers and scored a quick-fire 64 off just 32 balls, putting his side in a commanding position.

After his departure, Rana carried on the momentum and kept hitting boundaries. He got out on the second last delivery of the innings but not before scoring 81 off just 53 balls. Morgan also fell on the last ball but by then KKR had already reached an imposing total.

Sheikh Zayed Stadium, Abu Dhabi IPL 2020 Cricket Kolkata Knight Riders vs Delhi Capitals, Match 42
Get the latest updates on India vs Australia Series, check out the India vs Australia Schedule for 2020-21 and Ind vs Aus live score . Like us on Facebook or follow us on Twitter for more sports updates. You can also download the NDTV Cricket app for Android or iOS.