IPL 2020: Chris Gayle, after scoring a 50 for Kings XI Punjab against Royal Challengers pointed at the 'The Boss' sticker on his bat, albeit holding it upside down, and demanded "some respect for the name". 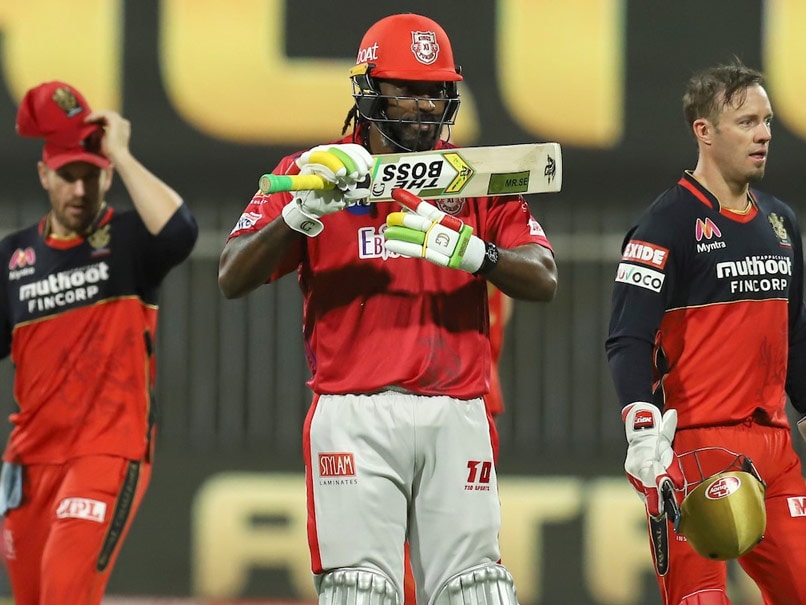 IPL 2020: Chris Gayle celebrated his fifty against RCB by pointing to a sticker on his bat.© BCCI/IPL

Chris Gayle, playing his first march of IPL 2020, scored a crucial 53 runs as Kings XI Punjab beat Royal Challengers Bangalore by eight wickets. After reaching to his fifty, the West Indian celebrated it in a unique style, pointing to a sticker on his bat which read 'The Boss'. In the post-match interview, the explosive batsman revealed what he meant by that gesture and what message he wanted to pass on. "All I wanted to say was put some respect on the name," Gayle said. However, he and the commentators shared a laugh when he was told he had held the sticker upside down.

When he is on the mic, expect nothing less than entertainment and laughs #Dream11IPL | @henrygayle pic.twitter.com/I62YPN1pES

Meanwhile, Indian head coach Ravi Shastriin an exclusive interview to NDTV, described Gayle as "one of the great characters of the game" who will go down as one of the biggest entertainers to have played the sport.

Gayle, one of the most destructive openers in world cricket, came in to bat at number three for the Kings XI Punjab on Thursday and stitched a solid partnership with skipper KL Rahul. The duo stitched a 93-run stand for the second wicket to put their side in the driver's seat.

KXIP, who have lost several matches from a position of strength, almost let the game slip away once again but Nicholas Pooran smashed a six on the final ball to seal the victory for his side.

Talking about KL Rahul's performance in the ongoing edition, Shastri said that he is mighty impressed with the way he has performed both as a leader and more so as a batsman.

"He has done brilliantly. With a little bit of luck, they could have won five. Last night they should have won easily but it went down to wire," Shastri told NDTV.

In the interview, Shastri also shared his thoughts on who he thinks are the best-groomed athletes across sports, picking Indian skipper Virat Kohli and Juventus star Cristiano Ronaldo as his two choices.

Despite beating the third-placed side second time this season, Kings XI Punjab are rock-bottom in the points table with just four points from eight matches. KL Rahul and Co. need to win all their remaining games to stand a chance to make it to the play-offs. They will next face defending champions Mumbai Indians at Dubai International Cricket Stadium on October 18.

Chris Gayle Ravi Shastri Cricket IPL 2020 Royal Challengers Bangalore vs Kings XI Punjab, Match 31
Get the latest updates on T20 World Cup, check out the T20 World Cup Schedule and Live Score . Like us on Facebook or follow us on Twitter for more sports updates. You can also download the NDTV Cricket app for Android or iOS.