IPL 2020, SRH vs RR, SunRisers Hyderabad vs Rajasthan Royals: Players To Watch Out For

SRH vs RR: SunRisers Hyderabad's big guns are all beginning to boom, however, the same can't be said for Rajasthan Royals stars, who after their whirlwind start, have completely gone off the boil. 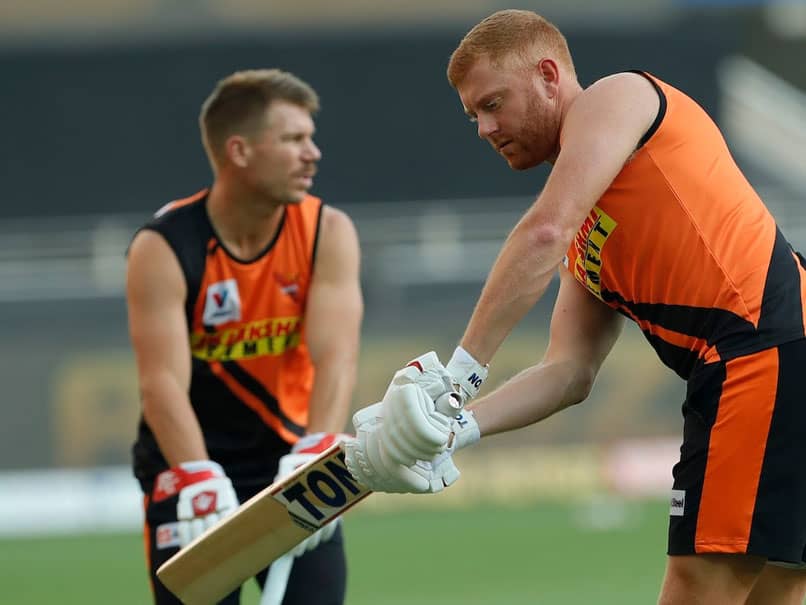 SRH vs RR: Jonny Bairstow and David Warner will once again look to tear into opposition bowlers.© BCCI/IPL

The business end of IPL 2020 is almost upon us, and most teams should by now have a settled XI and start thinking of launching an assault for the playoff places. SunRisers Hyderabad have set themselves up nicely after a torrid start to the season but it has been the complete opposite for Rajasthan Royals, who have lost four on the trot after winning their opening games. While things are coming together for SRH with the big names beginning to stamp their class, Rajasthan's batting has been woeful and in dire need of some runs.

Jonny Bairstow: The Englishman has been in top form throughout the season and already had three half-centuries to his name. The latest came in a whirlwind knock of 97 that blew away Kings XI Punjab in Dubai. Bairstow is currently the fourth-highest run-getter in IPL 2020, scoring 241 runs in six matches at an average of 40.16 and a strike rate of 138.50.

David Warner: The Australian has been far from his best but is beginning to find his touch in what is an ominous sign for rival bowlers. It speaks volumes about Warner's ability that a man who is fifth in the most runs-scored list this season is yet to really get going. 227 runs in six matches at an average of 37.83 and a strike rate of 124.72 is an excellent return, but the Australian has a lot more in his locker and RR must be very wary.

Rashid Khan: The Afghanistan spinner didn't have the best of starts to the tournament and that coincided with SRH finding the going difficult as well. But as they say form is temporary and class is permanent and Rashid Khan has once again proved that point. In the last four games, Rashid Khan has taken seven wickets, barely giving anything away. His economy rate of 4.83 is mind-boggling when you think of how some other world-class bowlers have fared.

Jos Buttler: It has not been the best of tournaments so far for the England wicketkeeper-batsman. He has scored a total of 130 runs in five matches at an average of 26 and a strike rate of 149.42. However, his 70-run blitz against Mumbai Indians in Abu Dhabi was a reminder to all about Buttler's ability to find the boundary. However, Rajasthan Royals will be hoping for more consistency from their England import.

Sanju Samson: It's crunch time for the Kerala star. After receiving high praise from all quarters following his whirlwind start to the tournament, the plaudits have suddenly vanished. But that comes with the territory. A cricketer is only as good as his last game, and Samson has been far from that in recent matches. The stylish right-hander needs to find form again, if RR are to have any chance of making the playoffs.

Jofra Archer: The England pacer is the only player in the Rajasthan Royals camp that has shown some consistency. He has got better as the tournament has progressed but has found little support from his teammates. The 25-year-old has taken a total of eight wickets so far at a brilliant economy rate of 6.91. He returned with figures of 3/24 against Delhi Capitals, who still managed to score 184/8. So one can imagine how dismal the other RR bowlers have been.

Jofra Archer IPL 2020 Sunrisers Hyderabad vs Rajasthan Royals, Match 26 Cricket
Get the latest updates on India vs England Series, India vs England , live score and IPL 2021 Auction . Like us on Facebook or follow us on Twitter for more sports updates. You can also download the NDTV Cricket app for Android or iOS.