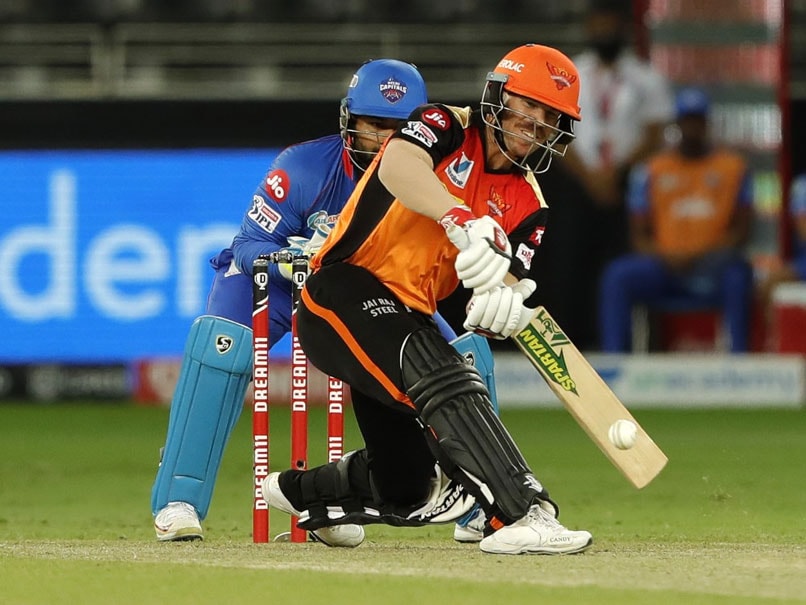 SunRisers Hyderabad beat Delhi Capitals by 88 runs in Dubai on Tuesday and kept their Indian Premier League (IPL) 2020 campaign alive. SRH were helped along by captain David Warner and Wriddhiman Saha, who added 107 runs for the first wicket in 9.4 overs to give their team a platform for a big score. Warner was dismissed for 66 but Saha carried on to make 87 off 45 balls, helping SRH finish on a mammoth 219 for 2. While Saha's returns with the bat made headlines, Warner's innings of 66 off just 34 balls – he got to his 50 off 25 balls – showed the captain taking a lot more responsibility the top of the order, especially in the absence of Jonny Bairstow, who sat out to accommodate Kane Williamson in the XI.

“I took a bit of responsibility at the top of the order, and take it to the bowlers. It's tough to play orthodox cricket in these conditions, so I have to open up 360 degrees,” Warner said after the match.

“Difficult decision to leave Jonny out and get Saha in, and especially batting a batsman like Kane at 4. Incredible knock from Saha though and his strike-rate in the powerplay was incredible,” he added.

With the ball, Rashid Khan took 3 for 7 in four overs of miserly leg spin and helped SRH bowl out DC for 131 in 19 overs.

“As for Rashid, it is incredible that he's he's taking so many wickets and not going for runs, especially given the dew and the moisture here,” Warner said.

Delhi Captain Shreyas Iyer called it a “big loss” but stressed it's not the time for his team to get “bogged down.”

“We still have two games left but one win is really important, that's what we are waiting for since the last three games. Back-to-back losses is definitely going to put us under the pump,” said Iyer after DC lost their third game in a row.

“We lost the game in the powerplay itself. Getting 70 runs in the first six overs was really commendable and the way they went after our bowlers was amazing.

“We need to have that strong and positive mindset. These losses are not going to put us down.

“As a team, we have been doing amazing throughout so these few matches shouldn't get into our heads.

Wriddhiman Saha Rashid Khan Shreyas Iyer IPL 2020 Sunrisers Hyderabad vs Delhi Capitals, Match 47 Cricket
Get the latest updates on ICC Women's Cricket World Cup 2022 and IPL 2022, check out the Schedule , Live Score and IPL Points Table. Like us on Facebook or follow us on Twitter for more sports updates. You can also download the NDTV Cricket app for Android or iOS.