IPL 2020, KXIP vs DC: Jimmy Neesham hit the winning six for Kings XI Punjab in their win vs Delhi Capitals. 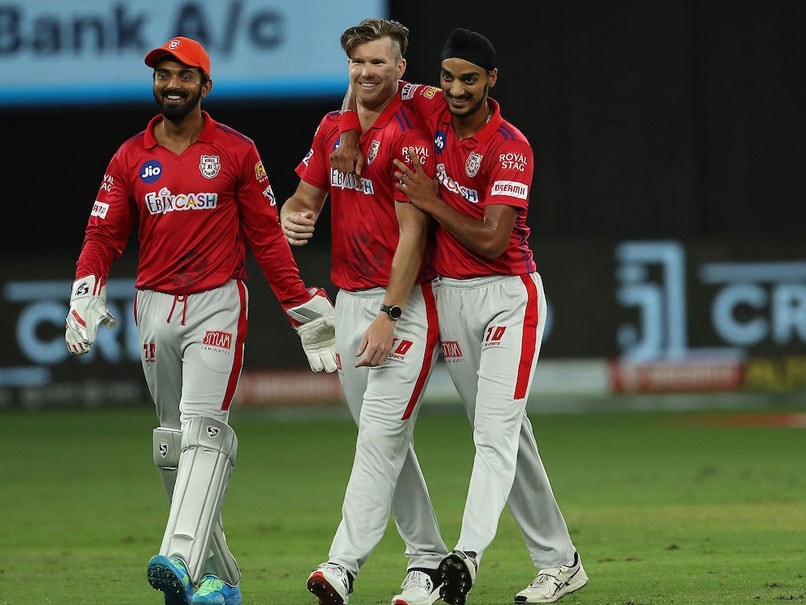 Kings XI Punjab all-rounder Jimmy Neesham termed the five-wicket win over Delhi Capitals on Tuesday as a complete team effort. Punjab bowlers restricted Delhi to 164/5 in their 20 overs despite Shikhar Dhawan's record-breaking second consecutive century thanks to Mohammed Shami's 2-28 in his four overs. The batsmen did not let the team down as Nicholas Pooran's 52 off 28 and Glen Maxwell's 32 runs guided them over the line after skipper KL Rahul (15) and Mayank Agarwal (5) failed to get going in the game.

Swashbuckling batsman Chris Gayle also played a quickfire knock of 29-run from 13 balls before Ravichandran Ashwin got rid of him. Punjab chased down a total of 165 with six balls to spare.

Neesham remained unbeaten at 10 while Deepak Hooda scored 15 not out. Neesham returned with the figures of 1-17 in his two overs.

"We talked about finishing it in the 19th over and it was good to do it for a change instead of putting stress on fan's hearts. I thought it was an overall good effort, the bowlers were outstanding to restrict them to 160 something and the way Chris came out in the powerplay and played aggressively and got going quickly. It really allowed guys like Maxi and myself to come out and take our time and Pooran was outstanding as he has been in the whole tournament and I think it was a complete team effort," Neesham said in a video posted by KXIP on their official Twitter handle.

KXIP will next take on SunRisers Hyderabad at Dubai International Stadium on October 24.

James Neesham IPL 2020 Cricket Kings XI Punjab vs Delhi Capitals, Match 38
Get the latest updates on T20 World Cup, check out the T20 World Cup Schedule and Live Score . Like us on Facebook or follow us on Twitter for more sports updates. You can also download the NDTV Cricket app for Android or iOS.