IPL 2019, Kolkata Knight Riders vs Sunrisers Hyderabad Highlights: SRH are now fourth on the table with a match in hand. KKR remain stuck on sixth. 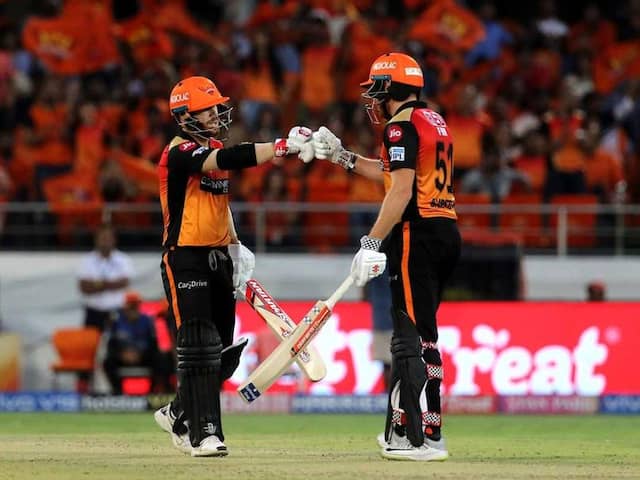 SRH vs KKR IPL Score: David Warner and Jonny Bairstow put up their fourth 100+ stand of the season© BCCI/IPL

SunRisers Hyderabad beat Kolkata Knight Riders by 9 wickets with 5 overs to spare at the Rajiv Gandhi International Stadium in Hyderabad in the first of two Indian Premier League (IPL) matches on Sunday. SRH return to the top four with this win, and they also have a game in hand over the other teams. As for KKR, this was their fifth consecutive defeat and their campaign is now in tatters. David Warner (67 off 38 balls) and Jonny Bairstow (80* off 43) put on their fourth 100+ stand of the season to thrash KKR. No KKR bowler was spared by the duo, but Sunil Narine (0/34 in 4 overs) and debutant Prithvi Raj Yarra (1/29 in 3 overs) were the bright spots for the visiting team. Being put into bat first, Kolkata Knight Riders scored 159/8 in their 20 overs. Sunil Narine (25 off 8 balls) launched an onslaught to give the visitors a great start, but eventually fell to Khaleel Ahmed (3/33), who also soon accounted for the wicket of Shubman Gill. He came back into the attack towards the end to also get the wicket of Chris Lynn (51), who played the role of the sheet anchor for KKR. Lynn and Rinku Singh (30 off 25 balls) put up a 51-run partnership in the middle overs. Andre Russell (15) hit two big sixes towards the end but perished in trying to hit a third. Rashid Khan (1/23) had not conceded a single boundary till his last over, and along with Khaleel Ahmed, was the pick of the SRH bowlers. (SCORECARD)