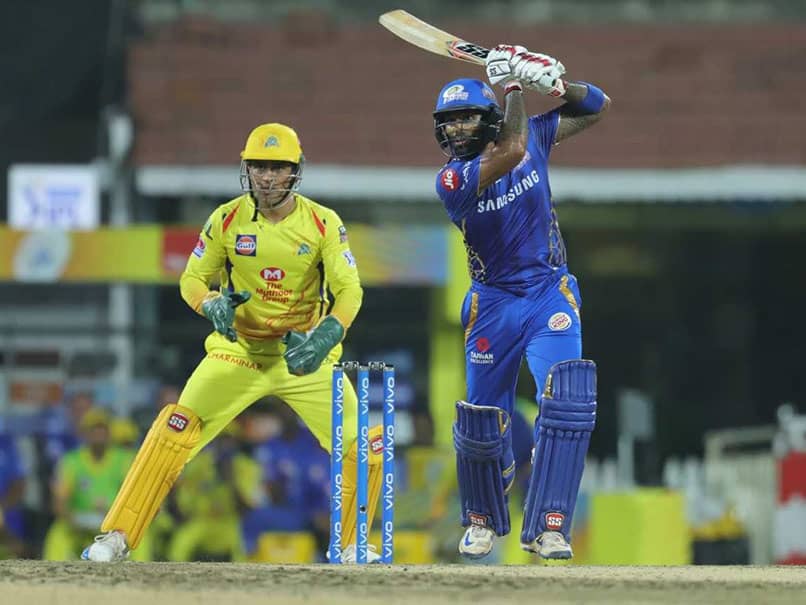 Mumbai Indians (MI) defeated Chennai Super Kings (CSK) by six wickets in Qualifier 1 of to reach the final of Indian Premier League (IPL) 2019. Chasing a modest target of 132, Mumbai Indians got off to a poor start as both their openers Rohit Sharma (4 off 2) and Quinton de Kock (8 off 12) fell inside four overs. But Suryakumar Yadav (71 unbeaten off 54) and Ishan Kishan (28 off 31) attacked the bowlers early on in their innings and batted sensibly. Both batsmen stitched the highest partnership of the match. Imran Tahir took two wickets off two balls to give CSK fans some hope but it came a tad too late. Earlier, CSK skipper MS Dhoni won the toss and opted to bat. CSK didn't get the start they wanted as Faf du Plesis, Suresh Raina and Shane Watson were back in pavilion by the inside powerplay with just 32 runs on the scoreboard. Murali Vijay (26 off 26 balls) and Ambati Rayudu (42 off 37 balls) carried the baton for CSK and scored 33 runs together. Vijay was deceived by a brilliant Rahul Chahar delivery in the 13th over. Next in, CSK skipper MS Dhoni came to bat with positive mind-set and played his natural shots on a difficult track. He was well supported by Rayudu who also played some good shots. Dhoni showed his class by hitting Lasith Malinga for back-to-back sixes in the 19th over. Mumbai Indians finished strongly as Jasprit Bumrah bowled a brilliant last over, conceding just nine runs, despite bowling a no-ball on which Dhoni got out. (SCORECARD)

MA Chidambaram Stadium, Chennai IPL 2019 Mumbai Indians vs Chennai Super Kings, Qualifier 1 Cricket
Get the latest updates on IPL 2020, check out the IPL Schedule for 2020 and Indian Premier League (IPL) Cricket live score . Like us on Facebook or follow us on Twitter for more sports updates. You can also download the NDTV Cricket app for Android or iOS.