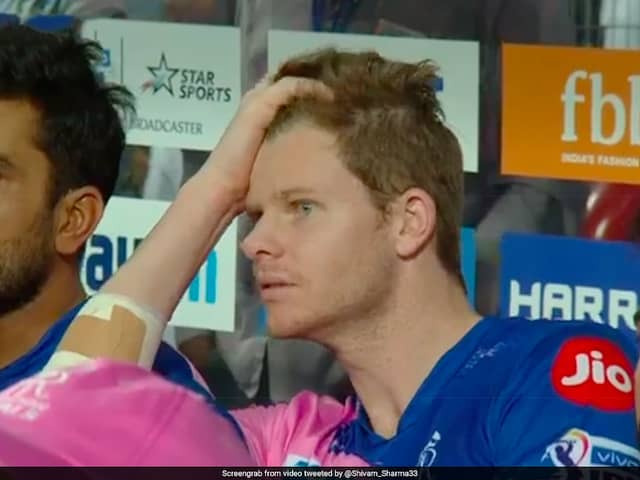 Steve Smith watched in horror as Riyan Parag got out hit-wicket in the penultimate over.© Twitter

Riyan Parag was the unlikeliest of heroes as Rajasthan Royals (RR) defeated Kolkata Knight Riders (KKR) to keep their hopes of qualifying for the playoffs alive. While big names like Sanju Samson, Steve Smith and Ben Stokes all failed to fire with the bat, 17-year-old Riyan Parag took the responsibility in the chase to take RR to the brink. However, the youngster was dismissed in the penultimate over in one of the unluckiest dismissals ever seen in IPL history. Rajasthan Royals captain Steve Smith, who was sitting in the dugout at the time, watched in horror as Riyan Parag got out hit-wicket off Andre Russell's bowling.

Riyan Parag tried to play a hook shot to Russell's bouncer but in the follow through, his bat clipped the bails even as the umpire signalled a no-ball and a four. Umpire, though, soon realised what had happened and signalled for the third umpire as confusion reigned supreme in the ground.

Replays clearly showed that Riyan Parag disturbed the stumps with his bat, bringing to an end his match-winning knock of 47 off 31 balls.

Here is a clip of the Riyan Parag's dismissal and Steve Smith's reaction:

Four, Dead Ball or Hit Wicket? It's all happening https://t.co/Usizba8I19 via @ipl

The 17-year-old from Assam played without any fear in only his 14th T20 match, hitting five fours and two sixes.

Royals still had a lot to do in the final over, needing nine runs to win. Jofra Archer, who crucially added 44 runs with Riyan Parag, smacked a four and a six off the first two balls of the final over to hand KKR their sixth consecutive defeat in IPL 2019.

With the win, the Royals moved up one place to seventh with eight points from 11 matches, the same as KKR, who remained at sixth spot, from the same number of matches.

Andre Russell IPL 2019 Kolkata Knight Riders vs Rajasthan Royals, Match 43 Cricket
Get the latest Cricket news, check out the India cricket schedule, Cricket live score . Like us on Facebook or follow us on Twitter for more sports updates. You can also download the NDTV Cricket app for Android or iOS.