Rahul Dravid was presented with a customised FC Barcelona jersey on his visit to Camp Nou. 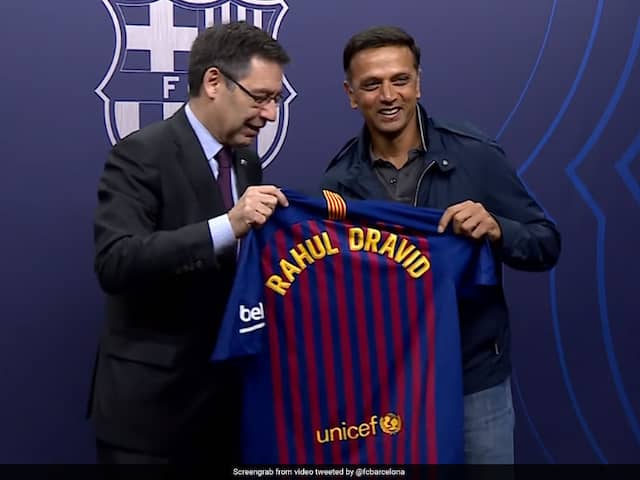 Rahul Dravid was present at Camp Nou on Sunday.© Facebook/Screengrab

Test great Rahul Dravid attended the marquee La Liga clash between FC Barcelona and Atletico Madrid at the Camp Nou on Sunday. Dravid, who is also the brand ambassador of Indian Super League (ISL) champions Bengaluru FC, was presented with a customised Barcelona jersey on his visit to the historic venue. The former India cricketer, in an interview posted by the Catalan club on their official Facebook account, shared his experience about watching the match.

"It's incredible, it's a huge honour, it's one of the things I've always wanted to do - come to Camp Nou and watch a football match. To be here and experience the atmosphere, it's absolutely electric," Dravid said.

The 46-year-old was all praise for five-time Ballon d'Or holder Lionel Messi and said, it was fantastic to see his ball control.

"To be able to watch players like Messi and Suarez play live, it's fantastic for me and my family. Thanks to Barcelona FC for the hospitality, it's been excellent," Dravid said.

Dravid was also of the opinion that though cricket in the top sport in India, football is also catching up with time.

"Cricket is a different game. We have great atmosphere and great crowd in the IPL and a lot of Test matches as well. Cricket is the No.1 sport in India but football is catching up very quickly. The ISL, the new league there since the last few years, Indian football is catching up but yeah, this was a lovely atmosphere to watch. Similar to some of the IPL games that we have," Dravid said.

Barcelona currently top the La Liga table and clear favourites to win the Spanish league with 73 points from 31 fixtures.

Atletico Madrid IPL 2019 Cricket
Get the latest Cricket news, check out the India cricket schedule, Cricket live score . Like us on Facebook or follow us on Twitter for more sports updates. You can also download the NDTV Cricket app for Android or iOS.