Virat Kohli Had All The Makings Of A Great Player, Says Gary Kirsten

Gary Kirsten was at the helm of the Indian team when Virat Kohli first made his mark. 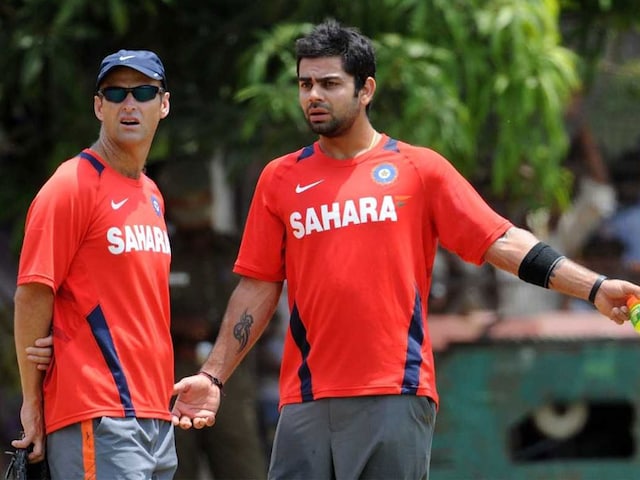 India captain Virat Kohli has earned plaudits across quarters for his prolific batting and captaincy skills. After making his debut in 2008, Kohli has improved tremendously, smashing all possible records. Former India coach Gary Kirsten, who is currently the batting coach of Indian Premier League (IPL) side Royal Challengers Bangalore (RCB), on Thursday praised the Indian captain. "It is great to be working with Virat again because he started when I was the coach. We had a lot of conversations early in his career about how he needs to set up his game. We knew he was going to be a great player, it was just a question of when he was going to get there. How he needed to play to be able to achieve the consistency in his game," Kirsten was quoted as saying by Wisden India.

"Any guy with half a cricket eye would have known that he was going to be a great player. His hunger for runs, his ball-striking ability - we are talking 2008; he hit the ball to all parts of the ground, he had natural power," pointed out Kirsten.

Kohli has always been an ardent admirer of Kirsten and the latter is happy to be able to cherish their relationship.

"A lot of those conversations have in many ways given him some of the thinking around how he needs to build his game. That has been fun. To come back and start working with him again, to see how he is going, we are just kind of building that relationship again. I am really enjoying it," said Kirsten.

Kohli is number one on the ICC ODI batsman rankings and is number 2 in Tests. He is also the leading IPL run-scorer, where he overtook Suresh Raina's record.

"He had all the makings of a great player in terms of ball-striking ability and talent. And then, the determination to go with it. The hunger to be great. It was all there. That's one of the easier recruitments you could make, that was not going to be difficult to work out. I wouldn't be only one who would have seen that, I think everyone would have seen that," Kirsten added.

With India embarking on tough away tours of England and Australia later this year, Kohli's form is going to be crucial.

Kirsten also highlighted the importance of Kohli's transition from a prodigious talent to the high performer.

"We know what he is now and what he looks like. It has been an amazing natural progression. Importantly for him now, as he moves into this next phase - he has gone from the prodigious talent to the high performer. The challenge now is to maintain that for a long period of time, to grow his leadership base, and he is doing that because I think it is an ongoing process," Kirsten said.

"He seems to be in a space where he is really willing to take on the learning that needs to be taken like we all need to in whatever phase we are in our lives. Take the learning on board to get even better," he signed off.

Comments
Topics mentioned in this article
India Cricket Team Royal Challengers Bangalore Indian Premier League 2018 Virat Kohli Gary Kirsten Cricket
Get the latest Cricket news, check out the India cricket schedule, Cricket live score . Like us on Facebook or follow us on Twitter for more sports updates. You can also download the NDTV Cricket app for Android or iOS.