Virat Kohli scored a defiant 92 not out in the Mumbai Indian vs Royal Challengers Bangalore match and won the Orange Cap. 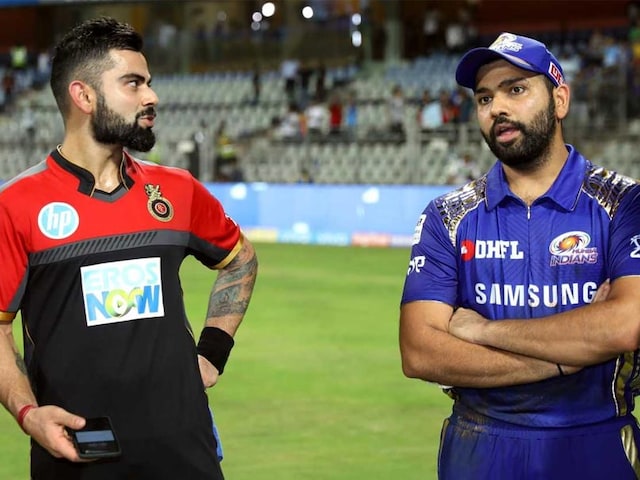 Mumbai Indians (MI) and Royal Challengers Bangalore (RCB) locked horns in a high-octane encounter in Mumbai as the home team registered their first win of Indian Premier League (IPL) 2018 by defeating the visitors by 46 runs at the Wankhede Stadium on Tuesday. RCB skipper Virat Kohli , the current owner of the Orange Cap, remained unbeaten on 92 off 62 balls but that was not enough as his team was chasing 216 but could eventually manage just 167/8 in their quota of 20 overs. Kohli fought a lone battle as no other batsman from the famed RCB line-up could get going or stay put for a decent partnership with him. Heartbroken by the loss, the 29-year-old said that as a unit, they failed to make a statement.

"We just threw it away, and must reflect on our dismissals. Few good partnerships would've done the trick for us. Not the 40-45 scores but 80-85 one. But credit to Mumbai who bowled really well," Kohli said at the post-match presentation ceremony.

Owing to his typically aggressive knock, the Team India skipper is now the highest run-scorer in this season's IPL and is also the current owner of the Orange Cap with 201 runs in four matches. However, the dejected captain was not ready to acknowledge his personal achievement as RCB slumped to their third loss in four games this season.

"I don't really want to wear the orange cap right now. Mumbai played well, we didn't get any chances, and when you have your back against the wall - like they did - they could play fearlessly. We tried our hardest but couldn't get the breakthroughs in after the two early wickets," Kohli added.

Earlier, Mumbai Indians captain Rohit Sharma struck a brilliant 94 off 52 balls before his bowlers produced a clinical performance as MI managed to end their winless streak, recording their first win and rising from the bottom of the table to the sixth spot.

"It wasn't the ideal situation and I thought Umesh (Yadav) bowled in the right areas. There's always something for the seamers in the first six overs, but the wicket was still soft when I came in, so just wanted to assess the situation and pace my innings. Always easier when you spend some time in the crease. This is a perfect game for us," Sharma said after the win.

Put into bat, Mumbai recovered from a shock start of 0 for 2 to post 213 for 6, their highest score of the season, mainly through the splendid batting of Rohit and opener Evin Lewis (65 in 42 balls).

"We can take lot of confidence from this game and move ahead. Yes, we lost the last three games, but we've played some good cricket. It was all about putting a collective performance. The idea behind me at No. 4 is to give the team some support towards the middle. That's why it's important to have an experienced player in the middle. Whatever I need to do for the team," he said.

"Lewis is very hard to bowl at once he gets in. The other day he played a crucial knock as well, but we did a mistake of not finishing off against Delhi Daredevils. If he continues to bat this way, then life will be much easier for our other batsmen," Sharma said.