Virat Kohli said that he learnt some things from AB de Villiers and made adjustments to his game while in South Africa. 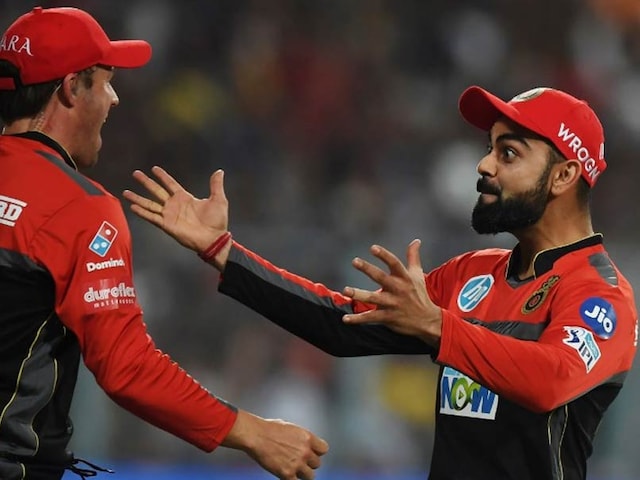 Virat Kohli, who became the leading run-getter of Indian Premier League on Tuesday, talked about how AB de Villiers inadvertently helped him in the recently concluded Test series against South Africa. In an exclusive chat with NDTV, Kohli said, "I actually learnt something from him in the recent Test series that we played. I made that adjustment to my game, which I haven't told him about yet." Kohli became the first India captain to win a bilateral series in South Africa. After losing the Test series 1-2, Kohli's team crushed South Africa to win the One-day International series 5-1 and then clinched the Twenty20 International series 2-1 to end the tour on a high.

The Indian captain also opened up on his county stint ahead of India tour of England and said, "People have their personal opinions and I respect that. But I have to do what is best for my preparation going forward."

Kohli will miss the one-off Test against Afghanistan in June and focus solely on the England tour (from late June to September) where the Indian team will play a five-Test series, three T20Is and a three-match ODI series.

He will leave for England after completing his assignment for Royal Challengers Bangalore in the 11th edition of the Indian Premier League (IPL).

Kohli went past Suresh Raina on Tuesday to become IPL's leading run-getter. Kohli needed 31 runs to catch up with Raina during the match with Mumbai Indians at the Wankhede Stadium and crossed the figure in the ninth over. He made unbeaten 92 against Mumbai but couldn't help his team go over the line and lost the match by 46 runs.

Kohli's teammate De Villiers also showered praise on the Indian team and said that they were more challenging than Australia in the Test series.

Comments
Topics mentioned in this article
Royal Challengers Bangalore Virat Kohli AB de Villiers Indian Premier League 2018 Cricket
Get the latest Cricket news, check out the India cricket schedule, Cricket live score . Like us on Facebook or follow us on Twitter for more sports updates. You can also download the NDTV Cricket app for Android or iOS.