IPL 2018: RCB's loss to SRH has left Virat Kohli's team on the brink of elimination. 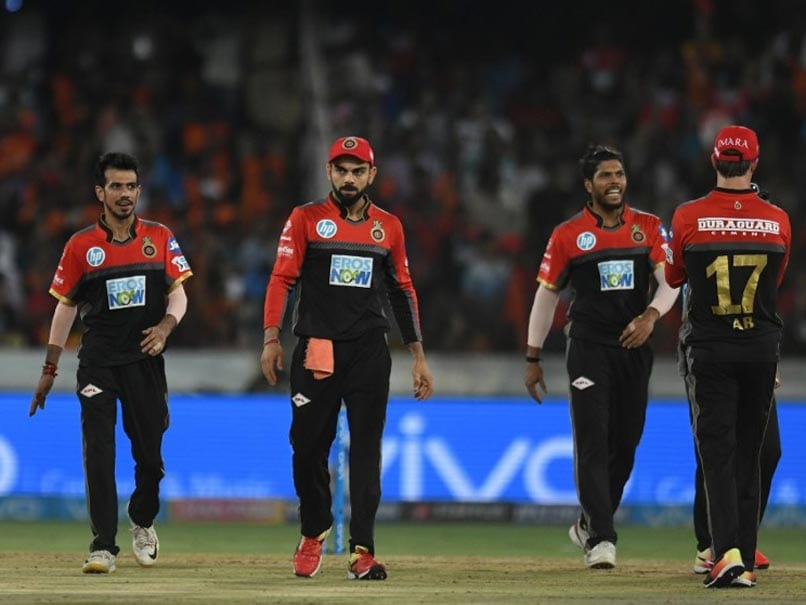 Virat Kohli said that aid his team RCB just weren't good enough on the day and deserved to lose to SRH.© AFP

Virat Kohli didn't mince any words in his analysis of Royal Challengers Bangalore's (RCB) narrow loss to SunRisers Hyderabad (SRH) at the Rajiv Gandhi International Stadium on Monday night. After the loss, the RCB skipper accused his team of letting the opposition get back in the game and throwing the match away. Kohli said his team just weren't good enough on the day and deserved to lose the game. RCB's bowling has let the team down on numerous occasions in IPL 2018 but in the loss against Kane Williamson's team, it was the batting that faltered despite a good start.

"It was a (tough defeat) but that is how the game goes. We deserved to lose this game. We were not good enough on the day. We scored 60-odd runs in the first six overs and then we ended up like that. I don't think we showed enough application. The kind of shots we played, they were not on at that stage. I think we threw it away," Kohli said at the post-match presentation ceremony.

"I think we let the opposition get back in the game. That has been the story of the season so far. The fielding was up to the mark but I think 10-15 runs less would have been ideal for us. This was a tough wicket (to bat). We should have done a better job with the ball but in the field we were up to the mark," he added.

Williamson's half-century and Shakib Al Hasan's solid 35 helped the hosts post a par score of 146 all out in 20 overs on a difficult batting track.

Pacers Mohammed Siraj and Tim Southee were the pick of the RCB bowlers, taking three wickets apiece while Umesh Yadav and Yuzvendra Chahal chipped in with a wicket each.

Parthiv Patel, playing only his second match of this season, gave RCB a fast start despite Manan Vohra's struggles at the other end.

Captain Kohli picked up from where Parthiv left off and bludgeoned Shakib for a 15-run over to put RCB on the front foot in the chase.

At 74 for two in 9.4 overs, things were going smoothly for Kohli's team but Yusuf Pathan pulled off a blinder to send the RCB skipper packing. The catch turned the match as RCB lost their next two wickets (AB de Villiers and Moeen Ali) for another 10 runs.

Mandeep Singh and Colin de Grandhomme steadied the ship for RCB but SRH managed to get a few overs in without giving too many runs away. With the run-rate climbing De Grandhomme decided to take matters into his own hands and smashed Rashid Khan for consecutive sixes in the 17th over.

RCB needed 19 off the final two overs but standing in the way were Siddarth Kaul and Bhuvneshwar Kumar. Kaul gave away just seven runs off the 19th over, leaving RCB needing 12 off the final over.

With the ball in Bhuvneshwar's hand that was just too much to ask from Mandeep and De Grandhomme and the Indian fast bowler proved emphatically why he is regarded as one of the best death bowlers in the world currently.