SunRisers not only registered their fifth consecutive win of the tournament but also defended yet another low total riding on the performance of their excellent bowling unit. 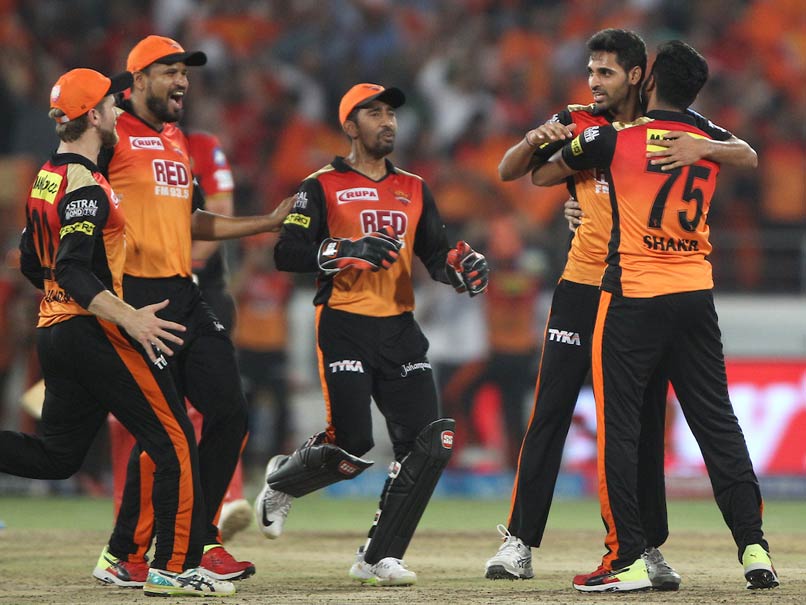 Table-toppers SunRisers Hyderabad produced yet another spirited bowling effort after skipper Kane Williamson's crucial half-century to beat Royal Challengers Bangalore by five runs and virtually assure themselves a place in the play-offs of the Indian Premier League on Monday night. SunRisers not only registered their fifth consecutive win of the tournament but also defended yet another low total riding on the performance of their excellent bowling unit.

Sent into bat, SunRisers managed a modest 146 but came back strongly after the break riding on yet another gutsy bowling display to restrict RCB to 141 for six.

By virtue of this win, SunRisers have consolidated their position at the top of the table with 16 points from 10 games.

RCB, on the other hand, are standing on the verge of elimination with just six points from 10 matches. Besides needing to win their remaining four games, RCB's fortune will also depend on the outcome of other matches.

Chasing the modest target, Parthiv Patel got RCB off to a brisk start scoring 20 off 13 balls before Shakib Al Hasan (2/36) caught him plumb in front of the wicket.

Skipper Virat Kohli (39) and opener Manan Vohra (8) added 36 runs for the second wicket before the latter was cleaned up by Sandeep Sharma.

Kohli, however, looked in ominous form and did not lose a single opportunity to punish the bad deliveries.

But Kohli should consider himself lucky as his counterpart Williamson dropped him at slip off Rashid Khan (1/31) in the ninth over.

But Kohli failed to capitalise on the chance as he got a leading edge off Shakib in the next over and Yusuf Pathan took a one-handed catch at short third-man to the delight of home fans.

RCB's woes compounded in the next over when Afghanistan's wonder spinner Rashid went through the defence of dangerous AB de Villiers (5) with a wrong'un.

Towards the end, Mandeep Singh (21 not out) and Colin de Grandhomme (33) added crucial 57 runs for the sixth wicket to keep RCB in the hunt.

RCB needed 19 runs off the last two overs but Siddharth Kaul (1/25) and Bhuvneshwar Kumar (1/27) came up with superb death bowling display to concede just 14 runs and seal yet another win for their side.

Williamson scored 56 off 39 balls while Shakib made 35 but it was Siraj (3/25) and Southee's (3/30) fiery spell that eventually put brakes on SunRisers' charge.

Sent into bat, SunRisers did not have the best of starts as they lost openers Alex Hales (5) and Shikhar Dhawan (13) early.

To make matters worse for the hosts, Manish Pandey (5) too didn't last long, handing out a simple catch to skipper Kohli off Yuzvendra Chahal (1/25) in the ninth over.

Thereafter, SunRisers captain Williamson and Shakib stitched 64 runs off just 50 balls for the fourth wicket to keep the hosts afloat.

While Shakib played the second fiddle, Williamson showcased his class striking the balls to all parts of the ground without taking any undue risk.

Williamson brought up his fifth half-century of the tournament in 35 balls.

But just when it was time for Williamson to accelerate, the Kiwi departed, holing out to Mandeep at deep midwicket square-leg off Umesh Yadav in the 16th over.

Soon after Williamson's dismissal, it was left to a set Shakib to up the ante but the Bangladesh all-rounder too departed an over later caught by Yadav at deep-square leg off Southee's bowling.

Comments
Topics mentioned in this article
Sunrisers Hyderabad Royal Challengers Bangalore Indian Premier League 2018 Cricket
Get the latest updates on IPL 2021, IPL Points Table , IPL Schedule 2021 , live score . Like us on Facebook or follow us on Twitter for more sports updates. You can also download the NDTV Cricket app for Android or iOS.