Rajasthan Royals picked up two vital points vs Mumbai Indians to stay in the IPL 2018 battle. 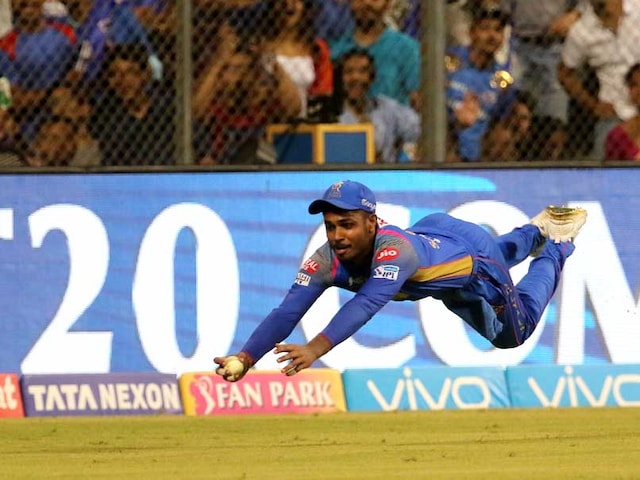 Since its advent, the Indian Premier League (IPL) has witnessed many spectacular feats of fielding. Rajasthan Royals' Sanju Samson added another stunner in the list during his team's clash against Mumbai Indians in Mumbai on Sunday. In what can be termed as one of the best catches this season, Sanju Samson covered a lot of ground and dived full stretch to take a one-handed catch to send Mumbai Indians' Hardik Pandya packing for 36 runs.

How amazing was @IamSanjuSamson 's Perfect Catch of the Match from #MIvRR ! Was it the best one yet? Watch it here: https://t.co/bgpqdwwx9r Tell us what you think, and don't forget to use #PerfectFan & #VIVOIPL, you could win match tickets if you do!

After his fine effort, fans started comparing Samson with planes and birds. Some of the fans also started calling the Kerala youngster Superman.

No , It's not a bird.That's flying Sanju Samson ! What a catch ?? #IPL — feeling stunned

England's Jos Buttler continued his red-hot form with a 94 not out as Rajasthan Royals thumped Mumbai Indians by seven wickets to boost their chance of qualifying for the play-offs.

After Mumbai posted 168/6, Buttler registered his fifth consecutive fifty, which contained five sixes and nine fours, to guide his team to seven-wicket victory with two overs to spare.

The loss left three-time champions Mumbai stranded at 10 points from 12 games, while Rajasthan took their tally to 12 after 12 games.

The Jaipur-based outfit needs to win its remaining two games to qualify for the play-offs, while Mumbai's fate is not in their hands and will have to depend on the performances of other teams.

Comments
Topics mentioned in this article
Rajasthan Royals Mumbai Indians Sanju Samson Hardik Pandya Ben Stokes Indian Premier League 2018 Cricket
Get the latest Cricket news, check out the India cricket schedule, Cricket live score . Like us on Facebook or follow us on Twitter for more sports updates. You can also download the NDTV Cricket app for Android or iOS.