In Rashid Khan's cameo for SRH vs KKR was a shot that reminded fans and commentators of MS Dhoni's famous helicopter shot. 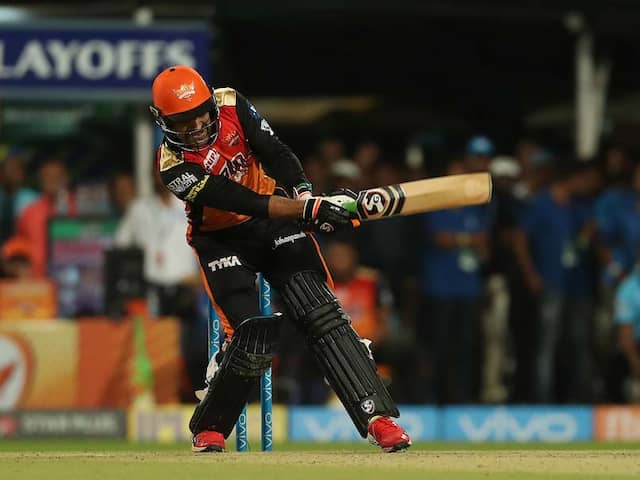 Rashid Khan was on fire for SunRisers Hyderabad vs Kolkata Knight Riders in the IPL 2018 Qualifier 2 at the Eden Gardens in Kolkata on Friday night. The Afghanistan teenager starred with both the bat, ball and was also electric in the field as SRH beat KKR by 14 runs to march into the IPL 2018 final where they will face MS Dhoni's Chennai Super Kings (CSK). Rashid Khan smashed 34 not out off just 10 balls to power SRH to 174 for seven. In Rashid Khan's cameo was a shot that reminded fans and commentators of MS Dhoni's famous helicopter shot.

Prasidh Krishna bowled a full length delivery to Rashid Khan and the Afghan sensation deposited the ball to the square leg boundary. Matthew Hayden, who was in the commentary box, said the shot had the twirl of MS Dhoni's helicopter shot while Sanjay Manjrekar called it the shot of the innings.

That helicopter shot from Rashid Khan was Dhoni-esque.

Woah Rashid Khan is lighting up the Eden Gardens with a MSD like helicopter shot for a six... #VIVOIPL #PerfectFan #Qualifier2 #SRHvKKR

Now that's what a cameo is!! Rashid Khan and brilliance of strokes and that six over tje square leg in last over was just fabulous, 34 off 10. #SRHvKKR @rashidkhan_19 #IPL2018 @StarSportsIndia

Rashid Khan's played some jaw-dropping shots today. Charges a quick bowler, and then goes right back to a full ball to scoop it over the leg-side.

Rashid Khan's innings came a crucial juncture for SRH with the Hyderabad outfit finding it difficult to get the big shots going in the death. Big hitters like Yusuf Pathan, Deepak Hooda and Carlos Brathwaite had all come and gone.

Rashid launched an astonishing attack on the KKR bowlers in the final two overs, hitting four sixes and two fours to take SRH to a score they would have only dreamed of after 15 overs.

Rashid then returned to haunt KKR with the ball. The 19-year-old registered figures of three for 19 in his allotted four overs, accounting for big guns Robin Uthappa, Chris Lynn and Andre Russell.

SRH will now take on CSK in the final on Saturday night. Hyderabad have lost all three times this IPL 2018 season when the two have met.

Comments
Topics mentioned in this article
Sunrisers Hyderabad Kolkata Knight Riders Afghanistan Rashid Khan MS Dhoni Indian Premier League 2018 Cricket
Get the latest Cricket news, check out the India cricket schedule, Cricket live score . Like us on Facebook or follow us on Twitter for more sports updates. You can also download the NDTV Cricket app for Android or iOS.