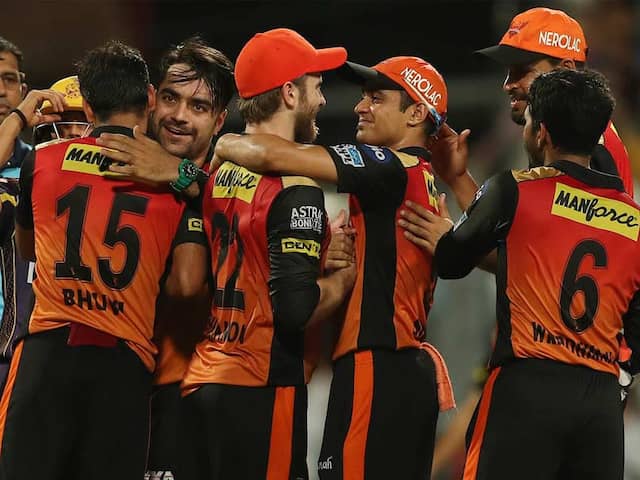 Rashid Khan produced an all-round performance as SunRisers Hyderabad (SRH) outclassed Kolkata Knight Riders (KKR) by 13 runs in the IPL 2018 Qualifier 2 at the Eden Gardens on Friday night. SRH will now face a formidable Chennai Super Kings (CSK) at the Wankhede Stadium, Mumbai on Sunday in a bid to lift the coveted IPL 2018 trophy. Rashid's late cameo (34 not out off 10) played a vital role as SunRisers posted a competitive total of 174/7 in 20 overs. As usual, Rashid shone with the ball and returned with figures of 3/19. Chris Lynn, Robin Uthappa and Andre Russell were his victims. Apart from his batting and bowling, Rashid was instrumental in Nitish Rana's run-out and also took two catches in the final over to see off Shivam Mavi and Shubman Gill.

Celebrations galore here at the Eden Gardens as the @SunRisers beat #KKR by 14 runs to enter the finals of #VIVOIPL.#Qualifier2 #VIVOIPL pic.twitter.com/lm3M94JZZO

KKR, in their pursuit of 175, were off to a scintillating start scoring 40 off 3.2 overs before Sunil Narine perished in search of quick runs. But by then Narine and Chris Lynn (48 off 31) had already done the initial damage as they went hammer and tongs against the SunRisers bowlers from the word go.

Narine made 26 off 13 balls with the help of four boundaries and one six before departing. But that didn't stop Lynn and new man in Nitish Rana (22) from scoring runs as the duo continued to bat aggressively and picked up boundaries and sixes at will to take KKR to 81 for one after eight overs.

Just when it looked KKR were on course, four quick wickets brought SunRisers back in the match.

First Rana got run out in the ninth over and then a struggling Robin Uthappa was cleaned up by Rashid in the 11th over as the batsman went for an expansive reverse sweep. To make matters worse for KKR, skipper Dinesh Karthik was castled by Shakib Al Hasan in the 12th over before Rashid caught set batsman Lynn plumb in front of the wicket in the next over as the Australian went for a sweep.

Rashid then came back an over later to dismiss dangerous Andre Russell as the West Indian edged a googly straight to Shikhar Dhawan at the lone slip as KKR slipped to 118 for six. Piyush Chawla scored a run-a-ball 12 before getting out but it was young Shubman Gill (30) who kept KKR in the hunt, hitting Kaul over mid-off boundary in the last ball off the penultimate over to bring down the equation to 19 off last over.

Shivam Mavi then hit Brathwaite for a boundary in the first ball off the final over before the West Indian picked up Mavi and Gill with consecutive deliveries to shut the door for the hosts.

Earlier, in their bid for a place in the final for the third time, KKR bowlers responded to Karthik's decision to bowl first as they never allowed Sunrisers batsmen to break free initially. Kuldeep Yadav stole the limelight with a 2/29 spell that inluded the prized wicket of Kane Williamson (3), the leading run-getter of IPL-11, while Narine (1/24) was once again at his tidy best conceding just two runs in the 17th over. But SunRisers snatched the momentum scoring 50 runs in the last three overs with wily Afghan spinner Rashid making the difference with his 34 not out off just 10 balls (four sixes and two fours).

Rashid stepped on the gas in Prasidh Krishna's final over with two sixes that yielded 24 runs. Having started off on an impressive note, Krishna finished with poor figures of 56 runs from his four overs to undo all the good work done by Kuldeep and Narine.

Earlier, KKR bowlers did not get a wicket inside the powerplay but their pace battery of Mavi, Krishna and Russell bowled with pace and accuracy to stymie Sunrisers run flow.  Drafted into the side in place of Javon Searles in a bold move by KKR to go in with three overseas players, Mavi troubled Wriddhiman Saha with his pace and movement off the seam en route to a fine spell of 1/33 from his full quota.    Returning after five matches, Saha looked awfully out of sorts with six runs from 12 balls and carried on with a dash of luck after being dropped on five when Karthik grassed a skier.

It did not matter much in the scheme of things as KKR got three wickets in five overs after the powerplay with Kuldeep giving breakthroughs with a twin blow in the eight over. In his first ball, Kuldeep trapped the dangerous-looking Dhawan (34) and in the fifth ball he deceived the 'Orange Cap' holder Williamson (3) with a wrong one. Kuldeep flighted the ball and Williamson failed to read the wrong one and the ball kissed the edge with Karthik not faltering this time to dismiss his Hyderabad counterpart.

Saha's knock of 35 from 27 balls finally came to an end after a brilliant stumping by Karthik.

Comments
Topics mentioned in this article
Sunrisers Hyderabad Kolkata Knight Riders Rashid Khan Cricket Indian Premier League 2018
Get the latest Cricket news, check out the India cricket schedule, Cricket live score . Like us on Facebook or follow us on Twitter for more sports updates. You can also download the NDTV Cricket app for Android or iOS.