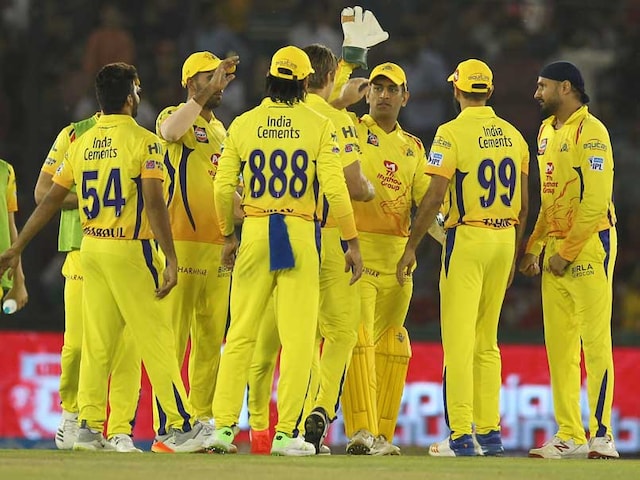 Shane Watson smashed a magnificent IPL century as Chennai Super Kings registered a comprehensive 64-run win over Rajasthan Royals on Friday. CSK, forced out of Chennai due to the Cauvery dispute, were shepherded by the 36-year-old Australian, who hammered 106 from 57 balls to lead his side to a challenging 204 for five after being invited to bat. Making full use of a dropped chance in the very first over on a flat track, Watson swung his arms when the ball was pitched outside off and positioned himself nicely against short and straight deliveries to find boundary after boundary. Watson hit nine fours and six sixes in his entertaining knock as another senior player enthralled the fans after Chris Gayle and CSK captain MS Dhoni showed their vintage touch in previous matches of the League. Three early wickets pegged Royals back and they were all out for 140 in 18.3 overs. (SCORECARD)

Royals' chase was spoilt when they lost three key batsmen inside Powerplay overs. They needed Sanju Samson (2), captain Ajinkya Rahane (16) and debutant Heinrich Klaasen (7) to fire at the top but all three could not make much contribution. Ben Stokes (45) and Jos Buttler (22) added 45 runs for the fourth wicket but the partnership broke when the latter was dismissed by Dwayne Bravo. Left-handed Stokes, who can turn the match on its head, was also dismissed soon and writing was clear on the wall. Watson shared a 50-run stand with fellow opener Ambati Rayudu (12) and then raised a 81-run partnership for the second wicket with comeback-man Suresh Raina, who hit a fiery 46 off 29 balls with nine shots to the fence. Watson was in regal touch as the Australian pummelled Royals bowlers after being dropped in the opening over, bowled by Stuart Binny. With no assistance on offer, the bowlers needed to be disciplined with their line and length but they were guilty of bowling either too full or short. If CSK could not take the total out of Royals' reach, it was because of leg-spinner Shreyas Gopal, who stopped the run flow if not choked the CSK line-up, by accounting for three batsmen, including MS Dhoni in quick succession. Gopal conceded just 20 runs in his four-over quota and CSK managed only 54 runs in their last seven overs. Royals' captain Ajinkya Rahane used five different bowlers in first five bowlers and it was Australian Ben Laughlin who got the first success as he removed Rayudu in the fifth. However already 50 runs were on the board and it was Watson who was the danger man. In came Raina and the left-hander creamed off four boundaries off Ben Stokes' over. The job only got tougher for Royals bowlers. At half-way mark, CSK were 107 for one. In no time, Watson was approaching his hundred and Raina, a half-century, but Gopal brought relief for Royals by getting the latter caught in deep by Gowtham. There was no stopping Watson from the other end. He not only hit powerful shots but also used his wrists nicely for some delicate boundaries. Gopal though was doing a great job for his side as he stopped run flow by dismissing CSK captain MS Dhoni (5), who had enthralled his fans with a blistering fifty in the last match, and Sam Billings (3) in his successive overs. Watson completed his century in the 18th over and was out on penultimate ball of the innings. He later took wicket of K Gowtham.