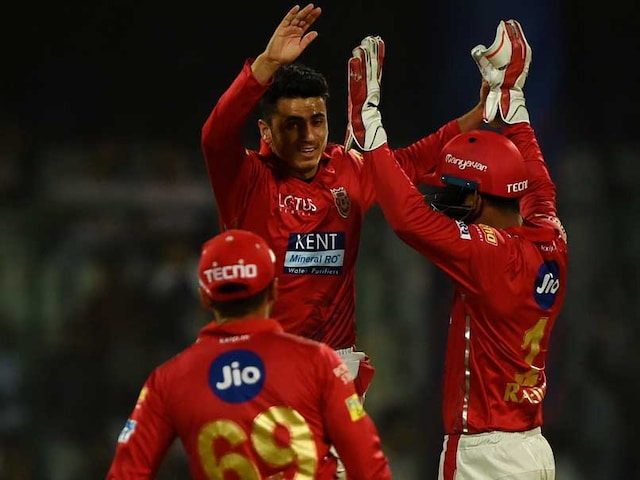 Kings XI Punjab continued their impressive form as they edged out Delhi Daredevils by four runs in a closely-fought Indian Premier League encounter on Monday. Shreyas Iyer's brilliant half-century gave the hosts hope throughout as they needed five runs off the last ball. However, Iyer couldn't time the ball well and was dismissed for 57 runs. Chasing a low total of 143 runs, Delhi got off to a disastrous start as they lost three wickets in the first six overs. Prithvi Shaw (22) gave an ideal start to Delhi but skipper Gautam Gambhir yet again failed to capitalise on the good start. Glenn Maxwell (12) also fell prey to a poor shot and was dismissed. Iyer along with Rahul Tewatia (24) tried their best but eventually Delhi fell short by four runs. (Scorecard)

Earlier, a fine bowling display by Delhi helped them restrict Punjab to 143/8 in their IPL clash. Liam Plunkett was the star bowler as he finished with bowling figures of 3/17 in his four overs. He took the important wicket of Lokesh Rahul (23), Mayank Agarwal (21) and Karun Nair (34). These three batsmen have been in good nick of late and they yet again played their part. Lack of partnerships for Kings XI Punjab hurt them as the Delhi bowlers were terrific throughout. Trent Boult (2/21) and Avesh Khan (2/36) also bowled well for Delhi. Punjab batsmen got off to starts but couldn't materialise and convert into big scores.

23:39 IST: Thank you for staying with us for the live match updates.

23:30 IST: An unorthodox shot by Mishra. Shifted across the crease and tried to flick it. One run taken. Its an excellent over so far.

23:21 IST: Overthrow by Yuvraj. Two runs. Freebies for Delhi and they won't mind at all. Delhi need 22 runs off 14 balls

23:20 IST: Tye bowls his final over. Single off his first ball. Falls short of the fielder. Iyer will be thanking his stars for not timing it well. 26 runs off 16 needed for Delhi to win

23:18 IST: Two runs. Iyer survives. Poor running between the wickets. Slight fumble. Direct hit and it would have been out. 15 runs off it. 28 needed off 3 overs now

23:15 IST: FOUR! WOW. Tewatia making this over count. Superb placement by him. Not the quickest ground but the ball races towards the boundary.  12 runs off the first 4 balls already.

23:14 IST: SIX! Tewatia slams it over the bowler's head. A good shot. Much repreive for DD. Sran under pressure now. Next ball goes to the leg side region for a single. DD 108/5

23:11 IST: Both Iyer and Tewatia are rotating strikes to keep the run rate going.

23:10 IST: Skimmer. Lands shot of the man at deep wicket. Unlucky to not find a boundary.

23:02 IST: Tewatia doing it well in the middle. Rotating strikes with Iyer. Sensible batting by him.

22:56 IST: Nicely placed by Iyer. Goes for two runs and gets it completely.

22:44 IST: Appeals for LBW turned down by the umpire. No review left for them. Replays show the ball was missing the stump. Shreyas Iyer survives. DD 65/4 in 10 overs

22:39 IST: Dan Christian comes in for Delhi. They are in deep trouble now.

22:36 IST: Delhi Daredevils lose their 4th wicket as Rishabh Pant departs for 4 runs vs Punjab. Mujeeb Ur Rahman strikes in his first ball itself. Clean bowls Pant | DD 61/4 in 8.1 overs

22:30 IST: FOUR! Short ball pulled away on the legsise for a four by Iyer. Length ball and he punishes it. Gets the placement right. A welcome boundary for Delhi.Back-to-back boundaries. Square leg fielder messes it up completely. DD 56/3 in 7 overs

22:26 IST: FOUR! Extra runs after an overthrow. Delhi cant afford to lose another wicket now. Shreyas Iyer and Rishabh Pant have to bat throughout now. DD 48/3 in 6 overs

22:13 IST: SIX! Wow. He hammers it over the leg side for a maximum. That was sweet. 81 metres long six. There was a man at square leg but he could just see the ball travel over his head. DD 39/1

22:11 IST: Andrew Tye comes into the bowling attack for Punjab.

22:09 IST: FOUR! Glenn Maxwell opens his account with a boundary.

22:02 IST: FOUR! What a shot. Wonderful struck by him. Such a good-looking shot.

22:02 IST: FOUR! Barinder Sran gets welcomed with a four. Thick edge for Prithvi and the ball races towards the boundary.

21:58 IST: Good first over for Ankit. Everyone appealing in the field. Review taken. Original decision was not out. Gambhir waits. He stays on the crease. Punjab lose their review. DD 6/0 in 1 over

21:57 IST: FOUR! Over the mid off. Gets just enough on this past R Ashwin. A boundary for the under-19 India captain.

21:55 IST: Confident defence of the first balls for Prithvi.

21:30 IST: Liam Plunkett bowls his last over. He has been superb today.

21:28 IST: FOUR! Leg bye. Punjab are desperate for runs here and it doesn't matter how they come.

21:25 IST: FOUR! Outside edge. Runs matter now for Punjab. Miller appears to have did that on purpose. Good improvisation. KXIP 127/5

21:20 IST: WICKET! Kings XI Punjab lose their fifth wicket as Karun Nair departs for 34 runs vs Delhi. Finally a catch is taken as Plunkett strikes for Delhi | KXIP 116/5 in 16.1 overs

21:18 IST: Liam Plunkett returns for Delhi with the ball.

21:14 IST: WIDE! And also a run taken. The last two overs have been expensive for Delhi.

21:10 IST: DROPPED! And there is an overthrow. Glenn Maxwell drops it. Miller survives. KXIP 97/4

21:05 IST: Good fielding at the boundary by Christian. A probable boundary saved.

20:58 IST: FOUR! Inside edge for Yuvraj. Lucky escape for him. A good over so far for Punjab.

20:57 IST: FOUR! What a welcome for Avesh Khan by Nair. Pressure back on the bowler. In the gap and batsman hammers it over the mid off region for a boundary. A much-needed one for the batting side.

20:56 IST: Punjab's innings seems to be going no where. They need to start finding boundaries now. Only 4 runs off Mishra's over. KXIP 76/3 in 12 overs

20:53 IST: Mishra is turning the ball well. Yuvraj is unable to read the delivery.

20:52 IST: Glenn Maxwell comes in for Delhi. Yuvraj and Nair need to start getting the boundaries soon. Credit to Delhi bowlers for maintaining their line and length, giving no room to Punjab batsmen. KXIP 72/3

20:50 IST: Not a bad over by Amit Mishra. Delhi have been brilliant with the ball. They have restricted the Punjab batsmen to 68 runs in ten overs. KXIP 68/3 in 10 overs

20:48 IST: Amit Mishra comes into attack. Gets the movement right in his first three deliveries.

20:43 IST: A brilliant over by Christian. He has been mixing up the base and length of his deliveries. 2 runs off it. Strategic time out taken after 9 overs. KXIP 63/3 in 9 overs

20:35 IST: Ball goes fine. Well done by the fielder. Only a single run for Nair.

20:34 IST: FOUR! Gets it through the fielder in the off side. Karun gets his boundary. The third man was in the circle. The bowler is not at all happy. KXIP 59/2 in 7 overs

20:30 IST: Both Mayank Agarwal and Karun Nair have been impressive so far. They need to continue their good form. 50 up for Kings XI Punjab for the loss of two wickets. KXIP 51/2 in 6 overs

20:27 IST: FOUR! What a shot by Karun Nair. A beautiful off drive. Impeccable timing by him. Not a good start for Avesh.

20:20 IST: FOUR! Rahul strikes it well enough over the bowler's head for a boundary.

20:18 IST: FOUR! What a shot. Mayank is turning it on the bowling side. Just opens the face of the bat and Mayank guides it through the off side boundary. KXIP 37/1 in 4 overs

20:17 IST: SIX! Rahul uses the pace of the bowler in the short leg boundary. Hits it clean off Avesh's delivery. Short boundary and he flicks it.

20:14 IST: FOUR! Comes off the bottom of the bat. Through the line and Mayank smashes it to the boundary.

20:10 IST: OUT! Avesh Khan strikes in his first over. Deceives Finch with the short one and a simple catch for Shreyas Iyer. Superb stuff by the pacer. Wonderful seam position for him in this over.

20:06 IST: Straight up. Not timed well to reach the fielder. Back of a good length and Rahul survives.

20:04 IST: Finch finds the gap. Quick outfield. Two runs for him. Slightly outside off stump, gets in the gap. A good first over Boult. KXIP 5/0 in 1 over

20:01 IST: A good first delivery by Boult. Right into the middle stump and equally well defended by Rahul. Trouble at the non-striker's end in the second ball but Rahul is safely back into the crease.

20:00 IST: Lokesh Rahul and Aaron Finch are the two openers for Kings XI Punjab. Trent Boult begins proceedings for Delhi with the ball.

19:35 IST: Delhi Daredevils have won the toss and have opted to field

18:55 IST: Hello and welcome to the live updates of the 22nd match between Delhi Daredevils and Kings XI Punjab.

They were done in by the versatile AB de Villiers' smashing knock last night and up next at the Feroz Shah Kotla, Daredevils will be up against the destructive Gayle, who has made a statement with two fifties and century, scoring those runs in his trademark style.

Thanks to Gayle's belligerence, Kings XI Punjab are firmly placed at the top of the order with four victories and a solitary defeat.

Given the form they have shown in the previous encounters, Kings XI Punjab will fancy their chances to continue the momentum against an embattled Delhi Daredevils outfit.

Royal Challengers Bangalore chasing down a target of 175 with two overs to spare, is more of a reflection of Daredevils' poor team selection rather than helplessness.

To start with, they lost to Kings XI Punjab in their away game, were then subjected to a humiliating defeat by Kolkata Knight Riders, emerged second best against Rajasthan Royals under the Duckworth/Lewis method and faced another reverse at the Chinnaswamy Stadium.

Delhi Daredevils' only victory has come against Mumbai Indians when English opener Jason Roy and the dynamic Rishabh Pant fired.

In fact, wicketkeeper Pant has been their best batsman this season with 223 runs from five games.

Returning to his home city franchise, skipper Gautam Gambhir would look to get his scoring touch back, after a hugely successful stint at Kolkata Knight Riders.

So is the case with the big-hitting Australian Glenn Maxwell, while Shreyas Iyer, who scored a brisk half-century against RCB, would look to continue in same vein.

Delhi's bowling has been an issue with Mohammed Shami off colour.

Trent Boult had decent figures in all the matches but likes of Shahbaz Nadeem, Mohammed Shami have flattered to deceive.

The logic of playing Vijay Shankar is still not clear as the team management is not able to send him up the order for lack of power in his shots. Even more baffling is the fact that he has not been called upon to bowl in four of the five games.

The task is certainly going to be difficult when up against Gayle and Co, with the Jamaican forming a deadly opening combination with KL Rahul.

India discard Yuvraj Singh would hope to get some runs under his bat, too, even as KL Rahul is asserting himself as a potent opener in shortest format with two brisk half centuries.

And how can one discount the presence of Aaron Finch, who has the ability to destroy any bowling attack on his day.

All-rounder Ravichandran Ashwin, along with Mohit Sharma, lend depth to the line-up, while the likes of Barinder Sran, Andrew Tye and Mujeeb ur Rahman shoulder the bowling responsibility.