Rajasthan Royals are placed fourth in the points table with 12 points from 13 outings. 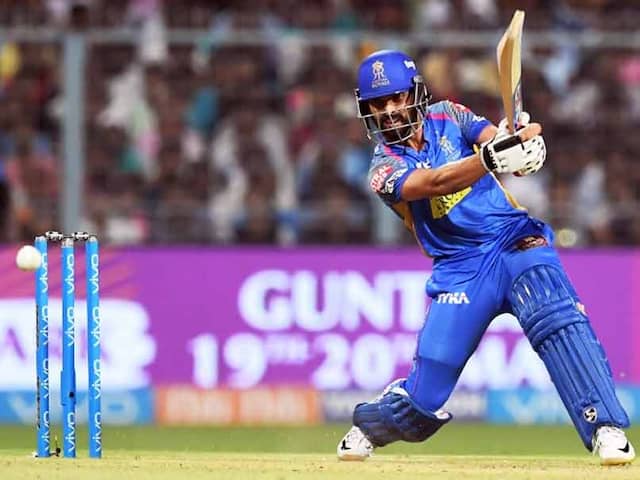 Rajasthan Royals are placed fourth in the points table with 12 points from 13 outings.© AFP

Blaming the batters for their six-wicket loss to Kolkata Knight Riders (KKR) in a crucial Indian Premier League (IPL) encounter, Rajasthan Royals captain Ajinkya Rahane said he still believes his team can make the playoffs. Rajasthan Royals are placed fourth in the points table with 12 points from 13 outings. Rahane and Co. will now take on resurgent Royal Challengers Bangalore in their final fixture. Not only do they need to win the game, they also need favours from other teams to keep Kings XI Punjab and Mumbai Indians -- both vying for a playoff spot along with RCB with a game in hand -- at bay. Royals' job would have been easier had they won against KKR at the Eden Gardens on Tuesday. But a sensational batting collapse coupled with Kuldeep Yadav (4/20)'s brilliance undid them.

"We lost because of our batting, even in the tournament we did not bat that well. Except Jos Buttler... his consistency was good to see. So many things the boys can learn from him. We thought 175-180 was a par score on this wicket," Rahane said at the post match press conference.

Royals were all out for 142 despite rocketing to 59/0 in four overs riding Buttler and Rahul Tripathi's fireworks. KKR gunned down a modest target of 143 with two overs to spare.

"The thing is, start which we got with Rahul Tripathi and Jos Buttler that was magnificient... but I feel after that we did not get any partnership. It's not about any individual.

"We lost because we did not apply ourselves in the middle and we needed to get a partnership going, especially when you get a start like that you have to back yourself. (You need) to apply your mind even in T20 cricket," Rahane said.

Asked about playoff chances, he added: "We have to believe in ourselves. It's not about hoping but believing in your ability. Anything can happen in cricket, we all know that. It's a funny game. We have to learn from our mistake, we have just one league game left, if we can learn from this game and stay positive... we were too positive with our batting tonight but that's the way it goes."

Royals have been heavily reliant on England wicketkeeper-batsman Buttler who has scored five consecutive half centuries including two unbeaten 90-plus scores that helped his team stage a turnaround after being in the dumps.

Stokes also underlined his worth by bowling exceptionally well against KKR with his figures reading 3/15. The pair, though, would leave for national duty when England take on Pakistan in the first Test at Lord's on May 24.

"We will miss Stokesy and Jos. I am happy for Jos. As a player when you get picked in a test team, it's everyone's dream that they represent their country in the longer format. So I am really happy for him but as a team we will miss him, his batting and inputs," Rahane said when asked how the team would cope without them.

Royals managed just 83 runs in 15 overs from 4th to 19th after the opening partnership was broken.

Rahane lauded his bowlers led by Stokes for their effort in trying to defend 142.

"I cannot blame the bowlers, they bowled really well. When you have 142 on the board, the effort our bowlers put in was magnificent. I think it's all about batsmen having to stand up right now in this important one match."

Comments
Topics mentioned in this article
Rajasthan Royals Kolkata Knight Riders Ajinkya Rahane Jos Buttler Indian Premier League 2018 Cricket
Get the latest Cricket news, check out the India cricket schedule, Cricket live score . Like us on Facebook or follow us on Twitter for more sports updates. You can also download the NDTV Cricket app for Android or iOS.