The CSK fan designed his wedding card like the franchises home games ticket. 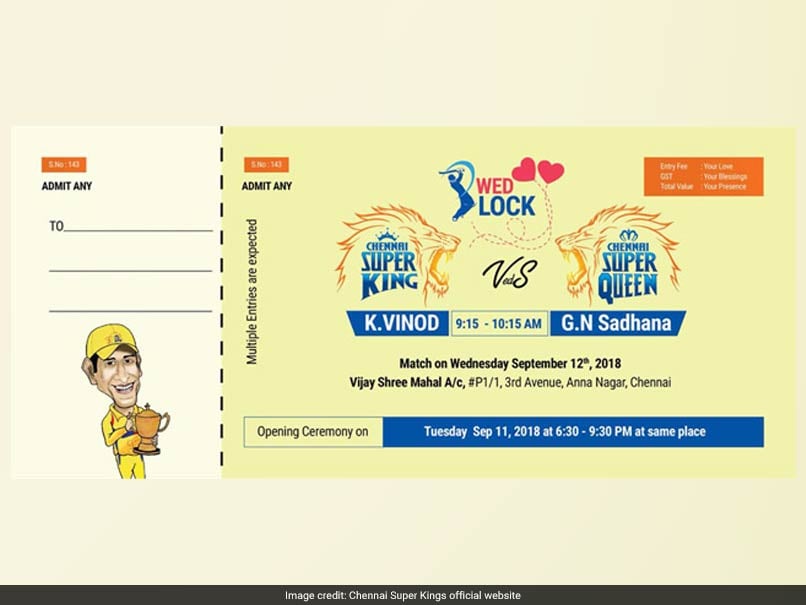 Chennai Super Kings is one Indian Premier League (IPL) team that boasts of a huge fan following. However, one fan K Vinod, went a step further in professing his love for the IPL franchise. His wedding invitation was inspired by CSK's match ticket for their home games. "Being a super fan of CSK and skipper MS Dhoni, I wanted to come up with something unique as my wedding invite," Vinod was quoted as saying by the official CSK website. The CSK Twitter handle also shared the image of the card. "Wishing the Super fan in Vinod Buddy a very happy married life ahead! The invite is a special #Yellove from the super fan!" the tweet was captioned.

Wishing the Super fan in Vinod Buddy a very happy married life ahead! The invite is a special #Yellove from the super fan! Read More - https://t.co/VcTPPCGqbb #WhistlePodu pic.twitter.com/TKOsxqVPDr

Vinod also revealed that he had received an autographed bat from CSK captain Mahendra Singh Dhoni in 2015. "CSK officials gave me a surprise in 2015, at the conclusion of our last home game, when my name was announced and I was presented with an autographed bat by Dhoni," he said.

Earlier in May this year, Shane Watson smashed an unbeaten 117 off just 57 balls to power CSK to an eight-wicket win over SunRisers Hyderabad in the IPL 2018 final at the Wankhede Stadium. This was CSK's third IPL title had come against the SRH team that had finished top of the standings after the league stage.

With the win, CSK were in level with Mumbai Indians in winning the tournament thrice. CSK also extended their record of qualifying to the Playoffs of all nine seasons they participated in.