IPL auction 2017: As expected, Englishmen Ben Stokes and Tymal Mills were bought for big money while the likes of Trent Boult and Kagiso Rabada also garnered a lot of interest. Catch all the highlights of the IPL Auction 2017 auction here. 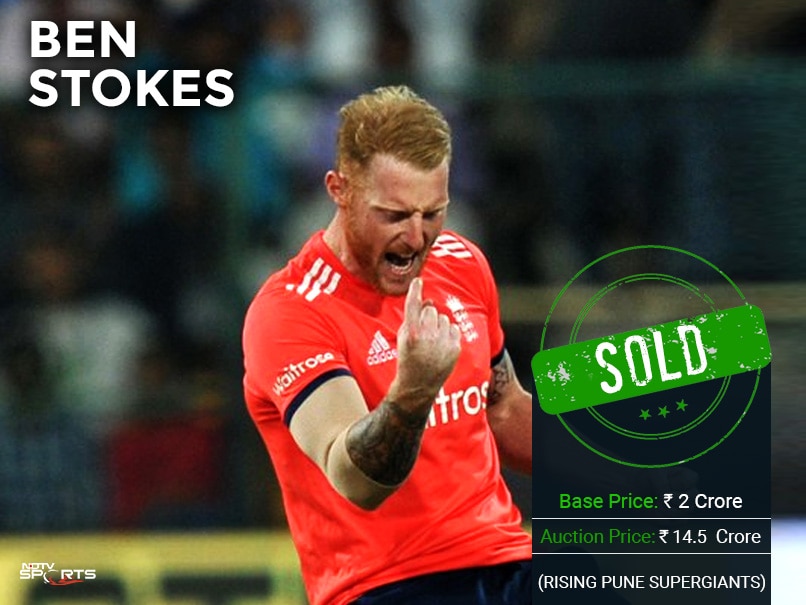 An intense day of bidding came to end with Ben Stokes making history by becoming the most expensive foreign player in the Indian Premier League ever. The all-rounder was bought by Rising Pune Supergiants for a whopping Rs. 14 crore while Royal Challengers Bangalore shelled out Rs. 12 crore to buy England's pace sensation Tymal Mills. Mohammad Nabi and Rashid Khan were the two Afghan players to be bought in the auction. There were a few shocks as well along the way. There were no takers for Ishant Sharma and Irfan Pathan while world's No.1 T20 bowler Imran Tahir also went unsold. (IPL Player Auction List)

Catch all the highlights of the IPL 2017 auction here.

15:35 IST: Thanks for joining us for all the action today. The IPL starts on April 5, so do join us for the all the live updates then.

15:28 IST: And with that concludes the IPL Player Auction. So, the key takeaways from today's auction was the price fetched by Ben Stokes, Tymal Mills while Mohammad Nabi became the first Afghan player to be bought in an IPL auction.

15:25 IST:Pune Supergiants get Manoj Tiwary for his base price of Rs. 50 lakh.

15:21 IST:Back after the break. Final session of the auction starts.

14:53 IST: Australian all-rounder Dan Christian is bought for his base price of Rs. 1 crore by Pune Supergiants.

14:21 IST:Sri Lankan all-rounder is the next man in and also goes unsold. Some peculiar bidding happening here. Surely, one team needed the hitting and bowling prowess of the Sri Lankan. He had also done well in the Big Bash.

14:14 IST: Another big shock is that there are no takers for South Africa's ace spinner Imran Tahir. He is currently the No.1-ranked T20 bowler but the IPL teams obviously don't rate him too highly. His base price was only Rs. 50 lakh.

14:13 IST: Ishant Sharma is once again snubbed by the IPL teams, which is a big surprise. His base price of Rs. 2 crore probably was too high.

14:11 IST: Australian pacer Nathan Coulter-Nile, who had a base price of Rs. 1 crore, is sold to Rs. 3.5 crore to Kolkata Knight Riders.

14:07 IST: England pacer Chris Jordan, with a base price of Rs. 50 lakh, is bought by Sunrisers Hyderabad.

14:05 IST: Gujarat Lions get a steal as they bag Roy for his base price. Surprise no other team bid for him.

14:03 IST: Punjab come in with the opening bid and get their man for his base price.

14:02 IST:First unsold player back in the auction pool is Martin Guptill -- available for a base price of Rs. 50 lakh.

12:41 IST: We will also take a breather here but do join us after the break.

We break for Lunch now and will be back at 2 PM IST #IPLAuction. Take a look at the top buys from the morning session. pic.twitter.com/idSdy3GNg2

12:40 IST: Lunch break!! Now the teams will choose the unsold players that they want to be returned to the auction pool.

12:22 IST: The likes of Brad Haddin and Niroshan Dickwella have all gone unsold for the time being.

12:14 IST:Intense bidding between Gujarat and Mumbai for Karn Sharma. His base price was Rs. 30 lakh and the bid has reached Rs. 2.8 crore. 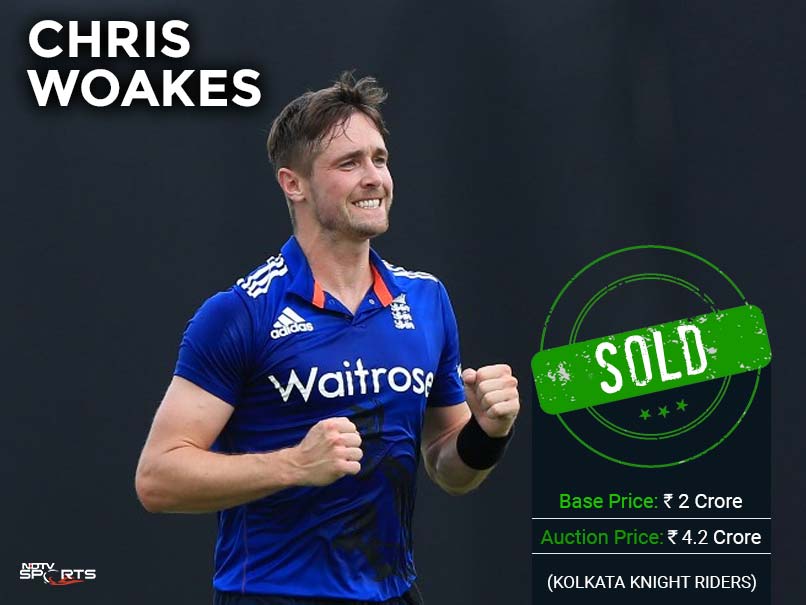 Chris Woakes was bought by Kolkata Knight Riders for more than double his base price.
Photo Credit: NDTV

11:58 IST: Bought for a whopping Rs. 4 crore by SunRisers Hyderabad. 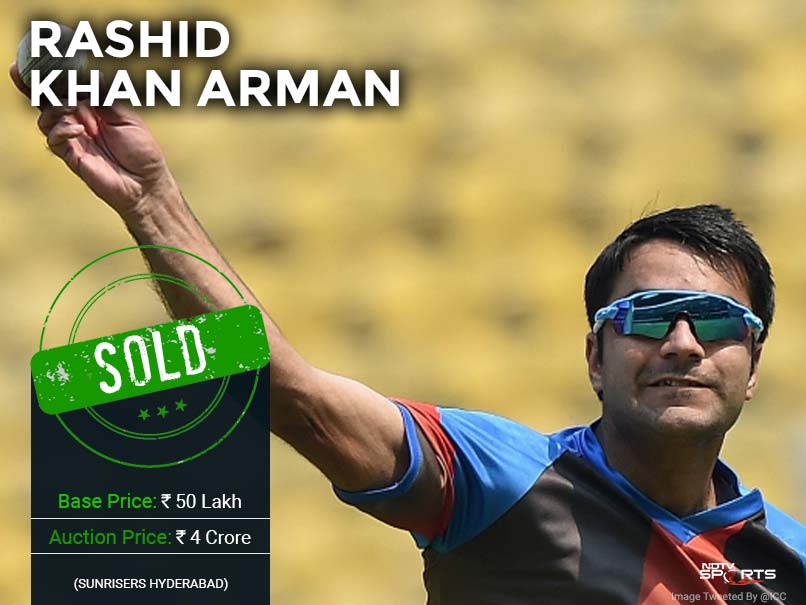 11:57 IST: Afghanistan's young spinner Rashid Khan Arman is garnering a lot of attention. His base price was Rs. 50 lakh.

11:51 IST: Uncapped spinner Murugan Ashwin with a base price of Rs. 10 lakh is sold to Delhi Daredevils for Rs. 1 crore.

11:42 IST:Let's listen in to what RCB chairman had to say after spending big on Tymal Mills.

11:35 IST: Aniket Choudhary is receiving some high bids. Gujarat and RCB are bidding aggressively for the young pacer. The bid has reached 1.5 crore.

11:18 IST:Gowtham K is getting some intense bidding.

11:16 IST: Nabi becomes the first Afghan player to be sold in an IPL auction. He has been bought by RCB for Rs. 30 lakh.

11:14 IST:Uncapped all-rounders up for grabs now!

11:09 IST:Prithvi Shaw and Umang Sharma remain unsold. Their base price was Rs. 10 lakh.

10:55 IST: Another short break in the proceedings!

10:49 IST: Wow, no takers for Ishant with his base price of Rs. 2 crore.He remains unsold.

10:46 IST: Mumbai make the first bid and get their man as no other team bids for the Australian pacer.

10:44 IST: Delhi Daredevils get Pat Cummins for Rs. 4.5 crore.Delhi are not holding back today. They have got two quality pacers in Rabada and Cummins. 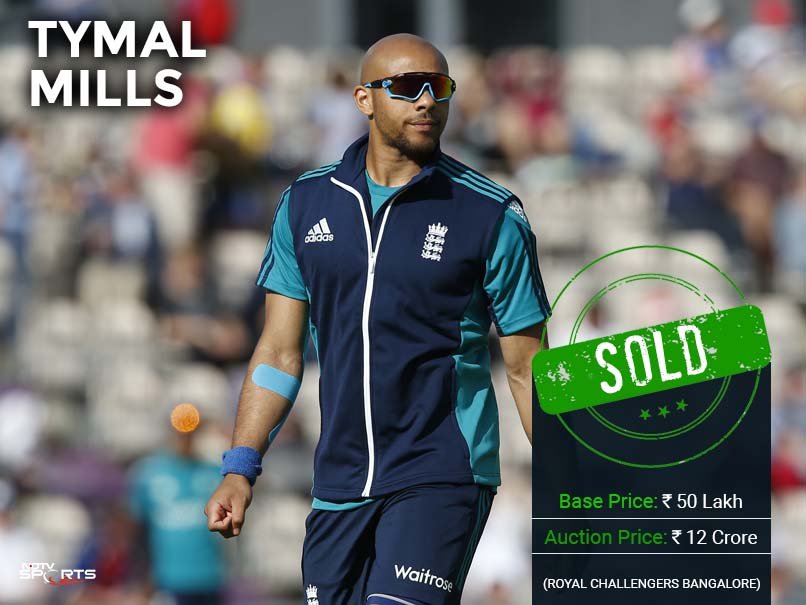 Tymal Mills, who had a base price of 50 lakh, was bought by RCB for a whopping Rs. 12 crore.
Photo Credit: NDTV

10:38 IST: The bid has already reached 6.2 crore with Mumbai and Punjab bidding aggressively.

10:37 IST:England pacer Tymal Mills is up next. He is also expected to get some big bids. 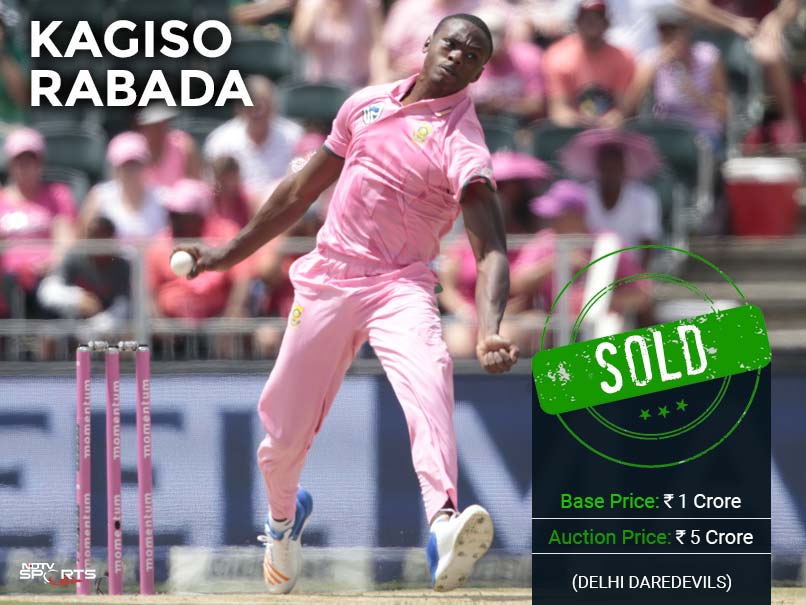 Kagiso Rabada was bought for five times his base price by Delhi Daredevils.
Photo Credit: NDTV

10:32 IST: South African fast bowler Kagiso Rabada with a base price of Rs. 1 crore is up for grabs now. Surely the teams will bid for him.

10:28 IST: West Indies' Nicholas Pooran sold to Mumbai Indians for his base price of Rs. 30 lakh.

10:23 IST:Wicketkeepers are now up for grabs!

10:06 IST:A small breather for everyone! So obviously, the big news till now is that Ben Stokes has been bought for Rs. 14.5 crore by RPS. It was expected that he would fetch a big price, so no surprises there.

09:58 IST: Sunrisers Hyderabad join the action and the bid is now 11 crore.

09:53 IST:Another surprise as Irfan Pathan with a base price of Rs. 50 lakh remains unsold.

09:52 IST: Sold to Delhi Daredevils for his base price.

09:50 IST:RCB get their man for Rs. 1 crore after some intense bidding.

09:48 IST:Gujarat Lions and RCB doing the back and forth.

09:47 IST: Finally some bidding being done by the teams and it's for Pawan Negi.

09:42 IST:Up next is New Zealand's middle order batsman Ross Taylor with a base price of Rs. 50 lakh.

09:40 IST: Surprise! Surprise!Jason Roy goes unsold. At least for the time being. 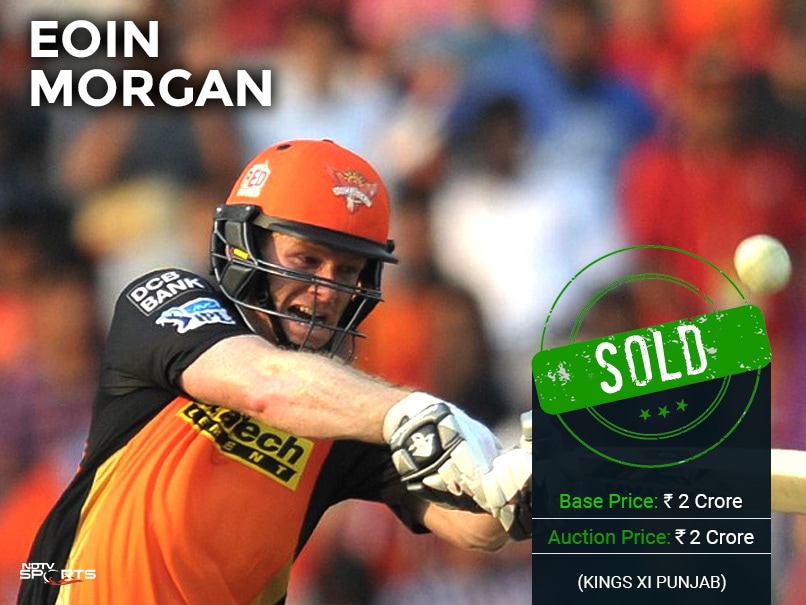 09:36 IST:Here comes the first player to be sold and it's New Zealand opener Martin Guptill. His base price is Rs. 50 lakh.

09:31 IST: All set for the IPL Auction and the action is expected to start soon.

09:25 IST:A message from the main man of the IPL auction.

This is my workplace for the rest of the day . That little gavel could be busy! #IPLAuction pic.twitter.com/Bq4mwURJqu

09:10 IST:Some big name players will be up for grabs today. The likes of Ben Stokes, Ishant Sharma, Eoin Morgan, Kagiso Rabada will surely be the big picks.

09:00 IST: Hello and welcome to the live blog of the IPL Player Auction taking place in Bengaluru.

The focus will be the English players too with the likes of all-rounder Ben Stokes, England captain Eoin Morgan and hard-hitting opener Jason Roy entering the fray. Ahmad

The base price ranges from Rs 10 Lakh to Rs 2 crore and there could be a clamour for uncapped Indian players based on their performances during the recent Syed Mushtaq Ali Trophy.

Among the uncapped Indian players, young performers like Jharkhand batsman Virat Singh and teenage sensation Prithvi Shaw (both Rs 10 lakh) can attract good bids. Not to forget Ishank Jaggi who was drafted as a last minute player after a string of good performances in the final leg of the Syed Mushtaq Ali T20 Trophy.

The auction pool is an interesting mix with five Afghanistan players. But Mohammed Shahzad (BP Rs 50 lakh) with his pyrotechnics and spinner all-rounder Mohammed Nabi (BP Rs 30 lakh) may get deals, which will be a historic first and big boost for India's friendly neighbourhood.

Comments
Topics mentioned in this article
Ishant Sharma Irfan Pathan Rising Pune Supergiants Mumbai Indians Sunrisers Hyderabad Cricket IPL 2017 Live Blogs
Get the latest updates on IPL 2021, check out the IPL 2021 Schedule and Indian Premier League Live Score . Like us on Facebook or follow us on Twitter for more sports updates. You can also download the NDTV Cricket app for Android or iOS.