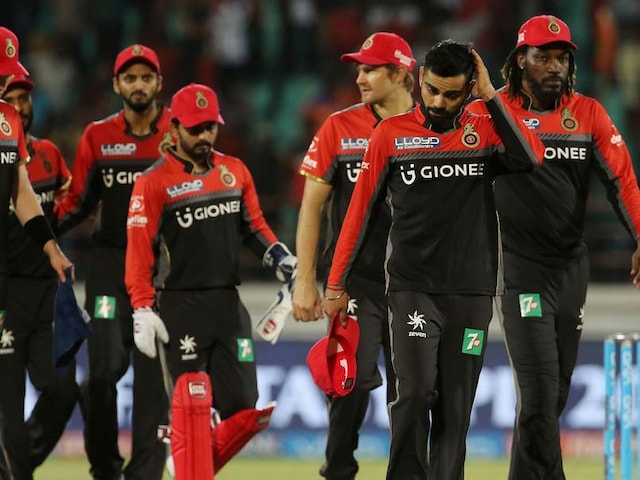 Riding on Chris Gayle's smashing fifty and Yuzvendra Chahal's three-wicket haul, Royal Challengers Bangalore defeated Gujarat Lions by 21 runs in their IPL encounter on Tuesday. The swashbuckling West Indies opener blasted a blistering 38-ball 77-run innings, while skipper Virat Kohli scored 64 off 50 balls to power RCB to a massive 213-2 in their stipulated 20 overs. Opener Brendon McCullum then played a superb 72-run off 44-ball innings, studded with two fours and seven sixes but he didn't get the support from the other end as RCB restricted the Lions to 192-7 to snap their three-game losing streak.

Young Ishan Kishan did come up with a 15-ball 39-run cameo but it was too late in the end.

Yuzvendra Chahal (3/31) was the pick of the bowlers for RCB as he picked up three crucial wickets -- Dwayne Smith (1), Suresh Raina (23) and McCullum -- in his four overs to derail Gujarat's runchase.

Earlier, Gayle and skipper Kohli gave Bangalore a blistering start as they amassed 45 in the first six overs and then went on to forge a 122-run opening partnership off 76 balls at the Saurashtra Cricket Association Stadium.

Gayle's innings was studded with five boundaries and seven massive sixes, while Kohli blasted seven fours and one six in his 50-ball innings.

Travis Head (30) and Kedar Jadhav (38) then provided the late charge to take RCB across the 200-mark. While Jadhav cracked five fours and two sixes, Head hit two fours and a six in his innings.