Sheldon Cottrell's inimitable celebration has made fans all over the cricketing world. 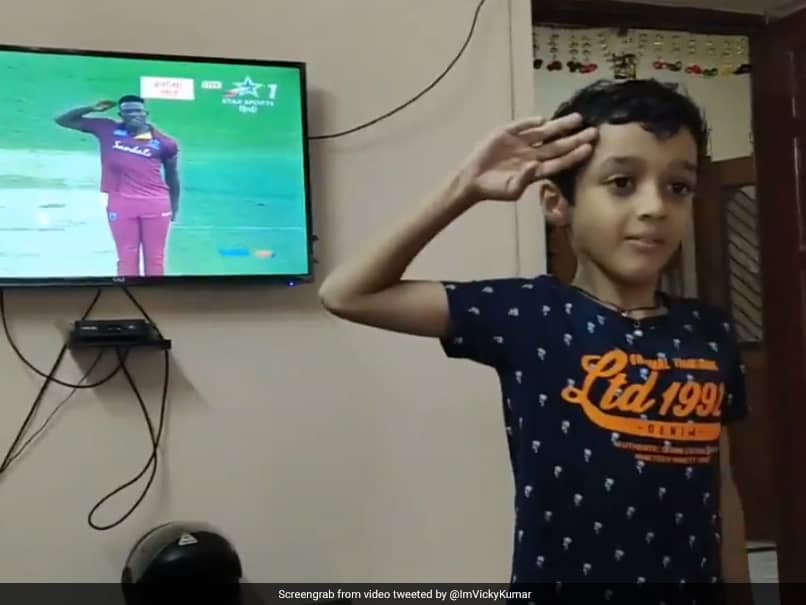 West Indies fast bowler Sheldon Cottrell, in his short international career, has impressed one and all with his bowling and more so with his unique salute celebration. Cottrell, who is currently in India for the limited -overs series, continues to impress everyone. Cottrell's performance on the ongoing tour has not only earned him plaudits from the experts but also given him a large fan following, which mainly comprises young Indian kids. Cottrell on Thursday replied to a video which shows kids imitating his trademark celebration. After the West Indies suffered a 107-run loss in the second One-day International (ODI) in Vizag, a Twitter user posted a video and wrote, "You had a hard day at office but your little fans enjoyed to the core!". To which Cottrell replied: "That's a reward in itself".

That's a reward in itself. #salute https://t.co/jCNZ49Mcac

This was not the first time, Cottrell had posted such videos on his social media account. In fact, a few days back Cottrell, like a true gentleman, had sought permission from his young fans' parents to publish the video featuring their kids on his website.

"To all my young fans - 1st of all I am your fan...I received so many great twitter videos of cute kids performing my salute. I would love to include them on my website but I want your parent's permission first. Email contact@sheldoncotterell.com," Cottrell had tweeted on Monday, a day after the first ODI in Chennai.

After his appeal, Cottrell received huge praise from the netizens and parents also sent him videos of their kids copying his wicket celebration.

Talking about the series, India fought back in style, after losing the first ODI, and clinched the second game with a huge margin to level the series 1-1.

The series decider will be played at Barabati Stadium in Cuttack on December 22.

Sheldon Cottrell India vs West Indies 2019/20 Cricket
Get the latest updates on IPL 2021, IPL Points Table , IPL Schedule 2021 , live score . Like us on Facebook or follow us on Twitter for more sports updates. You can also download the NDTV Cricket app for Android or iOS.