Kuldeep Yadav claimed 5/57 in the second innings as India defeated the Windies in the first Test by an innings and 272 runs. 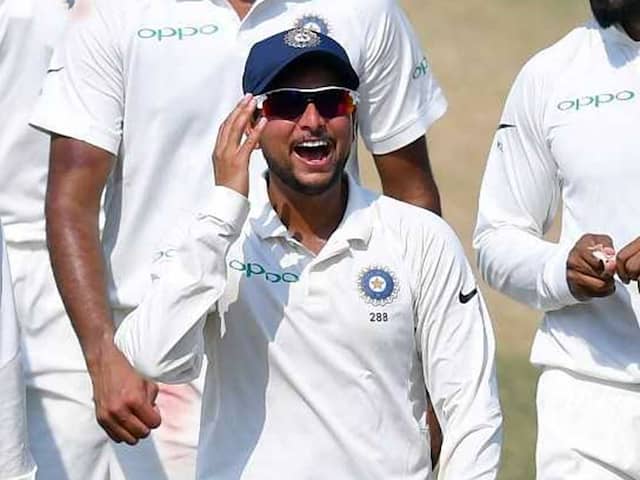 Kuldeep Yadav ended the 1st Test against the West Indies with figures of 6/119.© AFP

India outclassed the Windies by an innings and 272 runs in the first Test at the Saurashtra Cricket Association Stadium in Rajkot on Saturday. Wrapping up the match inside three days, India registered their biggest ever win in Test cricket. Wrist spinner Kuldeep Yadav ran through the Windies batting order in the second innings, claiming his maiden five-wicket haul in Test cricket. Registering figures of 5/57 in the second innings, Kuldeep became the seventh bowler to claim five wickets in all the three formats. After the emphatic win, the 23-year-old did something unique to make his maiden five-wicket haul memorable. Kuldeep, after the match, showcased his commentating skills and was seen commentating on his own performance inside his hotel room. The Board of Control for Cricket In India (BCCI) uploaded a video on their official website, where Kuldeep can be seen commentating on his own bowling performance.

Ever thought @imkuldeep18 would commentate on his own 5-wicket haul?

Well, we asked Kuldeep to give it a shot for you guys- by @28anand

During the first innings of the match, Kuldeep had a poor run with the ball, where he only managed a single wicket and went over 6 runs per over. Bouncing back in the second innings, Kuldeep unsettled the Windies batsmen with his variations and tore apart the visitor’s middle order. Talking about his performance, Kuldeep stated he struggled in the first innings as he was not able to adapt with the change of ball.

"It's very difficult to bowl with the red ball straightaway when you are coming from white ball cricket. Sometimes it takes time to adjust. I bowled too full in the first innings, I bowled according to the wicket and the batsman in the second innings. Ravi Shastri told me to try and bowl from round the wicket. I was happy with that angle. I am learning and I am happy with the way it all came out," Kuldeep said.

India currently have a 1-0 lead in the two-match Test series against the Windies. The second Test between both the teams will be played from October 12 in Hyderabad.

Virat Kohli Saurashtra Cricket Association Stadium, Rajkot India vs West Indies 2018 India vs West Indies, 1st Test Cricket
Get the latest Cricket news, check out the India cricket schedule, Cricket live score . Like us on Facebook or follow us on Twitter for more sports updates. You can also download the NDTV Cricket app for Android or iOS.