Kuldeep Yadav claimed his maiden five-wicket haul in Test cricket against the Windies at Rajkot. 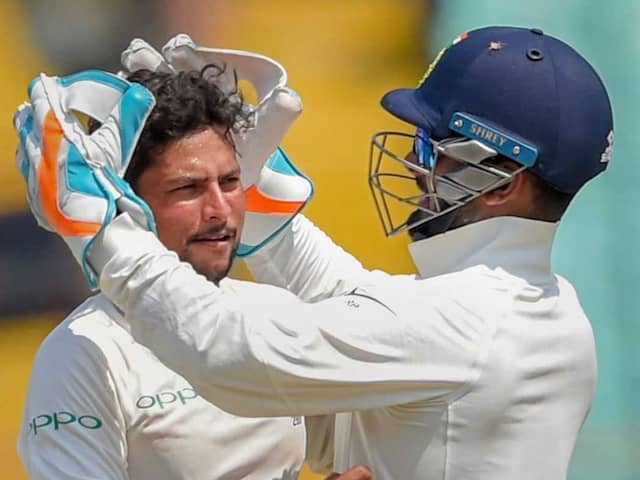 Kuldeep Yadav ended the 1st Test against the West Indies with figures of 6/119.© PTI

Kuldeep Yadav starred with the ball as India registered a massive win over the Windies in the first Test of the two-match series on Friday. Kuldeep claimed his maiden five-wicket haul in Test cricket, helping India thump the visitors by an innings and 272 runs at the Saurashtra Cricket Association Stadium in Rajkot. With his brilliant performance in the Windies second innings, Kuldeep joined a select list of bowlers to register a five-wicket haul in all three formats of the game. Kuldeep became the seventh bowler to achieve the feat and the second Indian bowler after Bhuvneshwar Kumar to join the list.

In the first T20I against England, Kuldeep had finished with match figures of 5/24 and joined Yuzvendra Chahal and Bhuvneshwar to become the third Indian to take five wickets in a T20I match.

Following this, the left-arm spinner clinched six wickets in the first ODI against England to pick his maiden five-wicket haul in ODIs.

In the first Test against the Windies, Kuldeep ended the match with figures of 6/119 as he ran through the opposition top-order. Kieran Powell, Shai Hope, Shimron Hetmyer, Sunil Ambris and Roston Chase were his victims.

Talking about his performance, Kuldeep said, "It's very difficult to bowl with the red ball straightaway when you are coming from white ball cricket. Sometimes it takes time to adjust."

"I bowled too full in the first innings, I bowled according to the wicket and the batsman in the second innings. Ravi Shastri told me to try and bowl from round the wicket. I was happy with that angle. I am learning and I am happy with the way it all came out," Kuldeep further added.

The second India vs Windies Test will be played at Hyderabad, starting October 12.